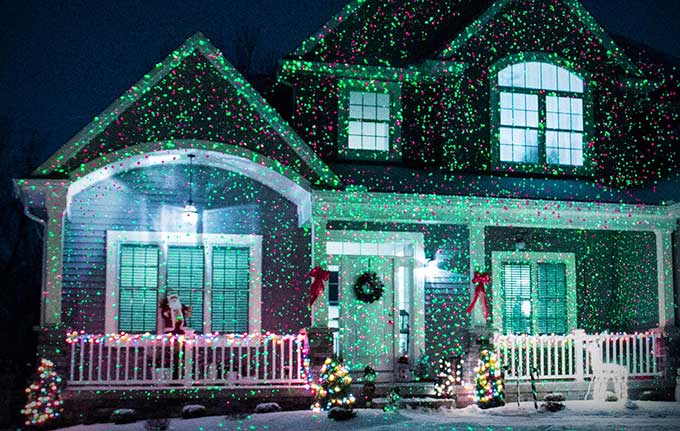 We have a large tree in our front yard. For the holidays I usually wrap a couple of strands of colored LED bulbs around its trunk. I can't put lights into the branches because my ladder isn't long enough, and even if I did have a taller ladder, I would be too scared to climb much higher.

This year I tried one of those laser landscape projectors. It has a red laser and green laser that shines through a piece of film that breaks the light into hundreds of beams. I put the projector near the tree and pointed it up at the branches. At night the effect was amazing. It looked like the tree branches were filled with hundreds of colored lights that would have taken hours and hours of dangerous work to install. I called out Carla to look. She didn't know I bought the projector. I told her that I had climbed the tree and strung the lights in the branches forty feet overhead. She even believed it for a second, until she remembered that I don't like climbing trees.

It looks so good I bought another last night so I could use it on another tree.

We have a large tree in our front yard. For the holidays I usually wrap a couple of strands of colored LED bulbs around its trunk. I can’t put lights into the branches because my ladder isn’t long enough, and even if I did have a taller ladder, I would be too scared to climb […]

Video on how to make 3D kirigami stars

Here’s a fun and easy decoration for your new year’s or award show viewing parties, or a craft to do with kids: make some 3D kirigami stars with just some paper and a pair of scissors.

Check out this great series of laser-cut wood Christmas tree ornaments, decorated with the pictures of science heroes. That’s Elizabeth Blackwell, the first female physician in the United States. You can also get Mary Leakey, Carl Linneaus, Rosalind Franklin, Charles Darwin, and more! Thanks for Submitterating, pambamboo!