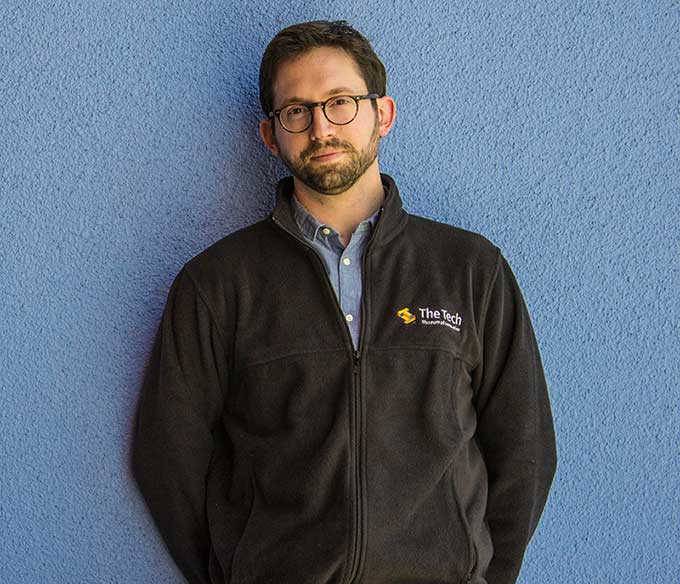 Over at Cool Tools, we interviewed Danny Haeg, director of Creative Collisions at the Tech Museum in San Jose, California. He moved here from Minnesota to jump into the simmering maker-melting-pot that is Silicon Valley.

"I feel slightly irresponsible for advising people to buy $95 shoes. I didn't think I would do that either, until I put these on. Now I get it. I'm converted. Allbirds are very new and they're fantastic. ... They're not like technical running shoes or anything like that, they're sort of lounging shoes. They're all merino wool from New Zealand. They're so comfortable. … It's been the shoe I've been wearing every day since I got them, because I've just been going to work and doing my business. I just suggest people give it a shot and if they don't like them, they can send it back. It's free returns and all that stuff."

"I think this is my favorite tool of all time. I didn't even know about it until a few years ago. … It's slow, which is very perplexing. It's so slow that you can just see the individual teeth rolling around. It's like 100 RPM. It makes these perfectly smooth cuts. There's like a little burr that you can knock off with a file. It makes smooth cuts, it makes them square, it makes them fast, it's really safe. I love it. I'm not advising anyone purchase it. That's sort of the tough part with it, it's a big expensive tool. I use it at the TechShop. Part and parcel with recommending the cold saw is, get a membership to TechShop. They're in a lot of cities around the country, and you'll get access to a cold saw. I think almost every location has one. ... I really suggest to anyone, even if you don't feel you're proficient with metal working or tools or anything, get a membership to TechShop."

"I was a small part of a Battle Bots team behind the robot Complete Control that was on Battle Bots recently on ABC. This $20 propane torch was on a robot. It was heralded as — I'm gonna sort of humble brag here — it was heralded as the most effective flame thrower in Battle Bots history because it recorded the first robot kill ever, which was really exciting for us. There's a Youtube video of it. A minute and a half into the match, we get the robot in the gripper. We grab under the robot, lift them up, and then turn on the flame thrower. It's a 3,000 degree torch, it's coming from just a regular propane tank. The brilliance of this Harbor Freight tool is someone engineered it and figured out how to have it properly aspirated … It turns out just with a few little tweaks, including this spark gap generator, it became a robot killer. That was pretty awesome to see.”
Watch Youtube video here.

"That's one of my favorite tools. I'm not talking about beautiful, awesome keyboards, necessarily, or the technique of typing really quickly. I don't have that. I'm just speaking to, in general, proper usage of the keyboard. I don't know if I'm preaching to the choir here, but I've seen a lot of very computer illiterate people who aren't knowledgeable about shortcuts. … I sound like a huge dork saying this, but it's a big deal. … I can't say enough how important that is. Alt tab, switch programs, or command tab on Mac, it's such a big deal. I taught for a little while, and I'd show my students how to change programs without their eyes pulling away from the screen so that they could have Facebook open or something while they're at school without people knowing it. … There's sort of like digital laziness that can come over you if you're just using your mouse, but the computer just lets you fly. I'm feeling like I'm already an old grandpa telling people they should learn to have better penmanship or something."