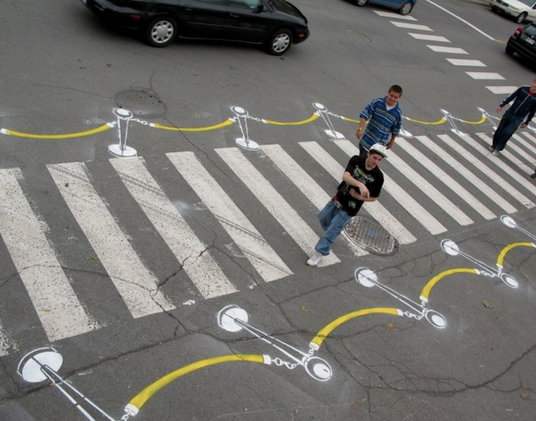 A few years ago Boing Boing shared this documentary about Canadian street artist Peter Gibson a.k.a. Roadsworth, and his Instagram account offers a treasure trove of more his work. Many of Gibson’s designs are politically pointed. As his captions explain, his street murals touch on everything from the refugee crisis to commercialism:

A new record: As of today, the UN has counted 65 million refugees in the world. I painted this last week as part of @muralfestival in collaboration with @amnistie_canadafr , in recognition of this tragic fact. Walls and fences are for painting and climbing not for dividing and obstructing. #amnistie_canadafr #muralfestival #refugee crisis

only 3 days left to satisfy the corporate overlords...bah humbug

But other pieces are more fanciful and playful, like this squirrel that appears to be darting down the road:

Giant squirrel in Indianapolis. Thanks to Kurt @bigcarpix for putting this together

Some of my favorite designs are below, and you can find the full collection of street art, as well as Gibson's other work, on his Roadsworth Instagram account.

Rope bridge spanning a road in Indianapolis. Bringing attention to Indianapolis' waterways. Thanks @bigcarpix and the wonderful peeps of Indy

[via The Laughing Squid]