Origami meets robots in a book of 46 DIY glowbots 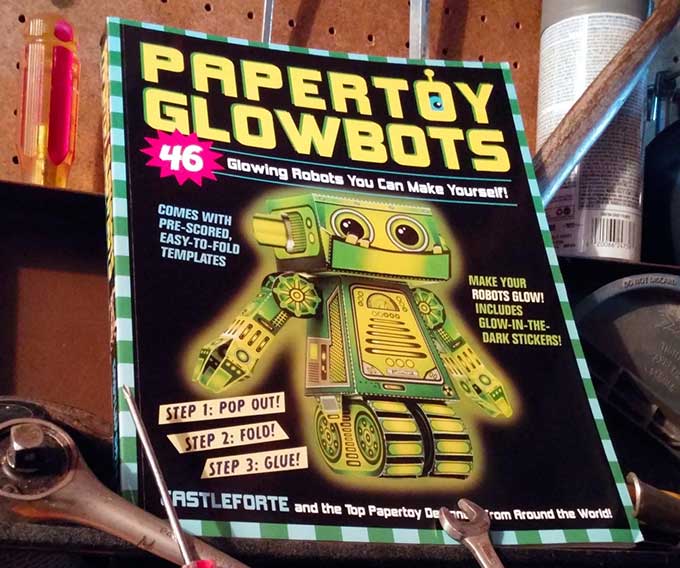 Attention, fellow mad scientists and monster creators! It’s time to put down our scalpels and electrodes and move into the twenty-first century. We need to upgrade our bio laboratories, transforming them into modern mechanical/electrical engineering labs. Anybody can pump several thousand volts into a creature created from spare parts. But, it’s the modern robot that gives us true control over every tiny detail of our creations, right down to the 1’s and 0’s of their digital brains. Imagine the horror and chaos that we can unleash with an army of mass-produced metal-monsters . . . mwa-ha-ha-ha-ha!

Papertoy Glowbots is a collection of forty-six robot designs by fifteen notable papertoy artists from around the globe including the author, Brian Castleforte. These robots glow, taking the previous book, Papertoy Monsters, a step further. Some have glow-in-the-dark stickers while others require the use of glow sticks, night-lights, or battery-operated tea light candles. One way or another, they have the ability to light up in some fashion.

Every robot is printed on both sides, so the finished toy has colorful graphics inside and out. Pieces are perforated for easy punch-out, and they are pre-scored for easy folding. Even the slots are pre-cut for easy assembly (no dangerous craft knives to contend with). Construction difficulties range from easy to advanced, and is recommended for everyone nine years or older, but my seven-year-old nephew gets a kick out of them too.

The book contains a variety of robots ranging from cyborgs to fully autonomous metal bots and mechanical horrors driven by living beings. Some are extraterrestrial in nature, and each one has its own back story for added fun. Choosing your next robot to build can be hard, but worth it in the end.

The really fun part is seeing your finished creations glow! Here’s a pro tip from one mad scientist to another: use a black light to make the glow-in-the-dark stickers spark and sizzle with intense light. It’s awesome!

Papertoy Glowbotscontains hours of tinkering fun at home, at school, or on the go. And, you don’t have to raid your father’s tool box or take apart the toaster looking for spare parts. The only tool you’ll need is glue.

Check out this collection of 30 PDF templates for cut-and-fold paper mechanisms and 3D optical illusions. Some of these will be familiar to readers of pop-up books, but many look like new innovations. [via @kellianderson]

Although you won’t find any official toys of “the Child” from Disney’s The Mandalorian in stores yet, you can decorate your tree with this authorized papercraft version of Baby Yoda in his floating bassinet. All you need is scissors, glue, and a healthy amount of some patience to get all the fiddly bits stuck together.

Rogan Brown creates intricate paper sculptures inspired by microorganisms: When looking at, for example, microbes and trying to imagine the vast colony of bacteria that lives in and on our bodies the range of factual visual representation available is relatively limited so I have to use my imagination to scale everything up and create an […]