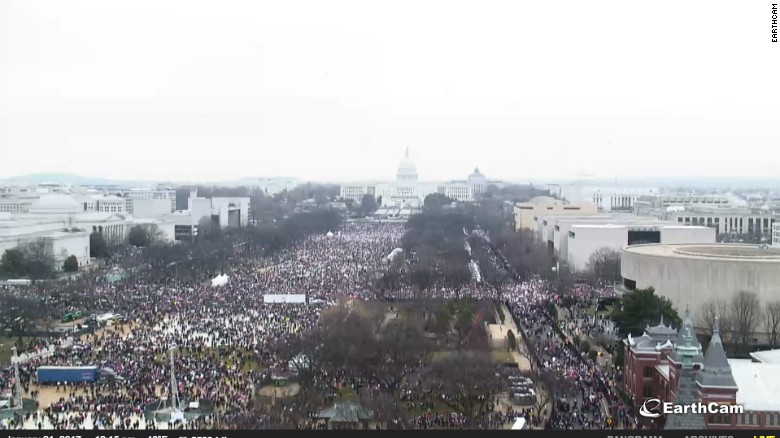 Photos have already emerged documenting just how many more people attended Barack Obama’s 2009 inauguration than Donald Trump’s 2017 one, but this gif from CNN proves the Women’s March on Washington crowd totally dominated Trump's too:

The two photos were both taken in the same place at 12:15 p.m. EST one day apart. The difference is yuge. And, yes, both images feature the infamous white plastic White House Press Secretary Sean Spicer claimed makes crowds look smaller. Vox is reporting the Women's March on Washington was about twice as big as Trump's inauguration, with a crowd of around 500,000 attending the Women's March. Meanwhile The New York Times—which has a lower estimate of Trump's crowd size—believes the Washington Women’s March was actually three times larger than the inauguration.

USA Today is reporting that in total Women's Marches around the world had a turn out of around 2.6 million people at 673 marches in all 50 states and 32 countries.

Comedian and former Daily Show correspondent Jessica Williams took to the stage during the Women’s March at Sundance to share a story about her mother and celebrate black womanhood. [via Mic]

That just about sums it up. Although, of course, Donald Trump is far from the first U.S. president to be accused of sexual assault, so feel free to apply the message of this sign all the way back to the days of the Founding Fathers. [via Twitter]