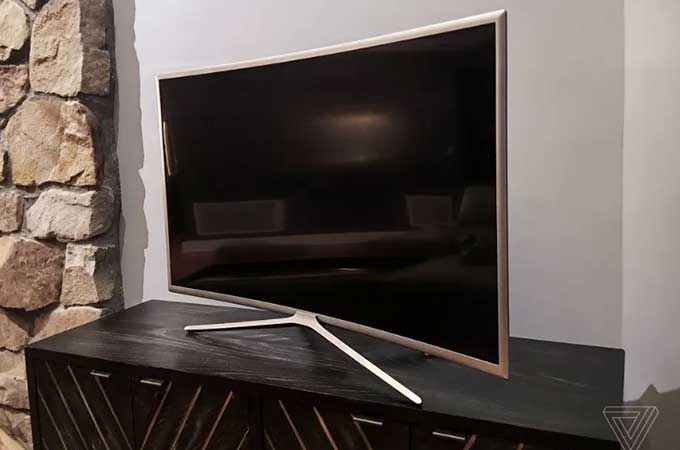 Becky Molln, whose husband Nilay writes for The Verge, reviewed the Samsung UN40K6250AF television set. It's a fantastic rant.

The screen is curved, which means that it picks up and seemingly magnifies every glimmer of light in the room. Because that’s what you want in a television screen. The curved screen demands that you sit dead center of the TV unless you want to observe the equally frustrated facial expressions of the person sitting opposite you on the couch trying in vain to see through the glare. The glare is ridiculous. It’s so completely terrible that I give up after watching something for 30 seconds and walk away whisper-yelling swears at my sucker of a husband for bringing this piece of shit into my home. This television makes me hiss in anger.

The TV also constantly prompts for Tizen software updates by placing a banner over the top of the display and has advertising in the menus. I really, really should have gotten something else.

I'll bet Carla could write a similar review of our Samsung fridge. In fact, she has banned Samsung products from our home.

Fact: The only thing that smells worse than your poop is tons of other people’s poop. If you don’t believe me, take a road trip to the town of Parrish, Alabama. They’ll back me up on this one: According to the Associated Press, the citizens of Parrish were forced to endure the stench pouring off […]

Here’s a gallery of stuff people bought online, only to receive something that was too small, too crappy, or completely unexpected.

Next month, the Isle of Wight Zoo in England is opening a National Poo Museum! The new exhibition will include preserved feces from a wide array of animals, from the Lesser Madagascan Tenrec to lions, and of course a 38 million-year-old coprolite, fossilized crap such as the specimen seen above. “It’s stinky, unpleasant and sometimes […]