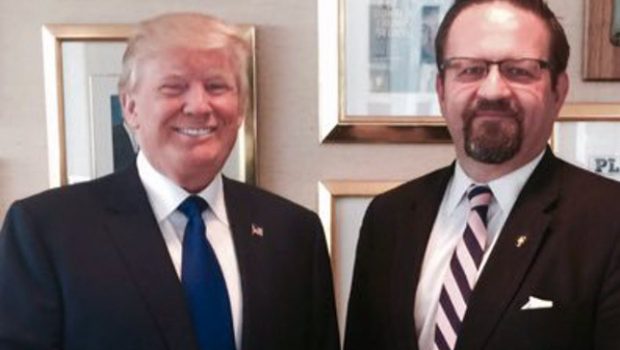 Sebastian Gorka is one of the Brietbarters that Trump took with him to the White House, where he serves as "counter-terrorism adviser." He's also a non-metaphorical Nazi.

Gorka got caught wearing a medal from Vitézi Rend, a Hungarian "far-right" group that the US State Department says was "under direction of the Nazi Government of Germany" during the war -- and whose founder imposed anti-Jewish laws before the war. Gorka claimed it was his dad's medal.

Turns out that Gorka is a "sworn member" of Vitézi Rend, having taken a "lifelong oath" of loyalty to the Nazi organization. He won't say whether he lied about this when he emigrated to the USA (these disclosures being part of the normal, extremely thorough vetting that migrants to the USA undergo). Such a lie would open the door to deportation proceedings for Gorka, now, or at any time in the future (there is no statute of limitations on deportation proceedings for migrants who lie or fail to disclose material facts during the immigration and naturalization procedure).

The Anne Frank Center for Mutual Respect is now calling for Gorka's resignation.

Gorka, who is also a member of the White House’s Strategic Initiatives Group convened by his former boss at Breitbart, Stephen Bannon, has positioned himself as one of the administration’s most combative spokespeople. Last month, he courted controversy after defending the White House’s Holocaust Remembrance Day statement (which failed to mention Jews or anti-Semitism), calling criticism of the statement “asinine” and “absurd.” That statement, when viewed in the context of his membership in an anti-Semitic group that collaborated with the Nazis, raises even more questions about his core beliefs.

According to Eva Balogh, a Hungarian-born Yale historian of Eastern Europe, Vitezi members must accept the Order’s original goals that were established by its self-described anti-Semitic founder, Adm. Miklos Horthy, who served as Regent of the Kingdom of Hungary between 1920 and 1944. Among other things, the goals include the aim “’to secure the lordship of the Hungarian race, which could strike down all subversive, anti-national efforts with formidable force.’ From its inception in 1920, the Order was an irredentist organization, whose slogan is still: ‘I believe in one God, I believe in one country, I believe in the divine everlasting truth, I believe in the resurrection of Hungary,’ which means the recreation of Hungary according to its pre-1918 borders.” Hungary’s pre-1918 borders include parts of present-day Romania, Slovakia, Ukraine, Serbia, and Austria.