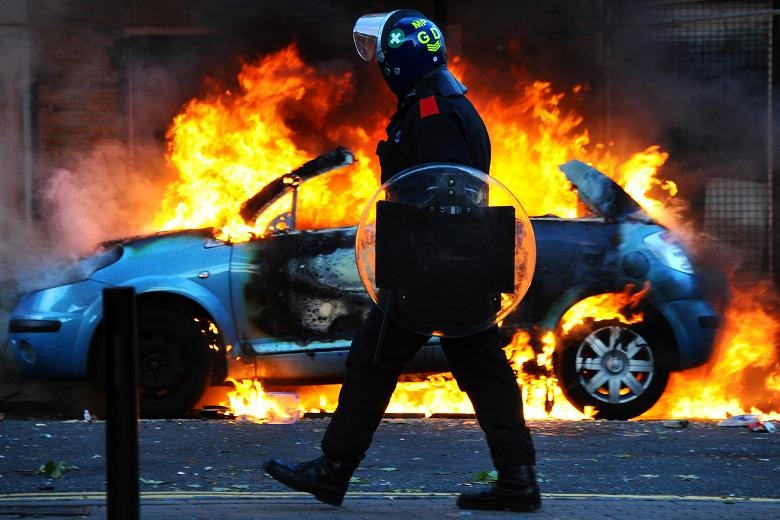 Laurie Penny's red pen of justice (previously) is gouting unstoppable fire today in her column on the relationship of cruel austerity to Brexit: the decade during which Conservative ideologues gutted the nation to make the banks whole again after the financial crisis, creating a lost generation, quietly murdering disabled people, leaving the poor standing in breadlines not seen since the Victorian era -- all the while invoking the spirit of the Blitz and insisting that "we're all in this together."

Penny reminds us of the political career of "alleged barnyard-animal fancier" David Cameron, his cowardly attacks on working people and his unwillingness to confront the social malaise he'd created, even when it gave rise to riots that set London aflame. Cameron compounded error with error, all the way up to the current mess, where "the UK Independence Party—a clique of bankers playing xenophobia for attention and airtime—somehow became a credible political force" and brought the country to the brink of seemingly unstoppable catastrophe.

Nine months later, London was on fire. By the time riots erupted across England in the febrile summer of 2011, it had become clear that all we were in together on this bitter little island was the rain—but some of us were still able to take our holidays abroad, which was what Cameron was doing until day three of the looting and burning. He eventually jetted home to declare the unrest “criminality pure and simple”—and nothing at all to do with the scissors he’d just taken to the social fabric of the country most people never wanted him to run in the first place. Under the Conservatives, six years of “legitimate concerns” by young, poor, and working people have been blithely dismissed. The students protesting as their college fees were tripled were ignored. Disabled people demanding to be treated with a scrap of human dignity were laughed out of the job centres as new rules forced them to crawl into to beg for basic assistance, and no, that is not a figure of speech—I know of more than one instance where people with mobility issues were made to prove it by walking until they fell over. The Tory ideologues did all of this and more, seemingly, for the sheer hell of it, because they damn well could.

In this climate, the rise of racism and Islamophobia were the only “legitimate concerns” that the state ever pretended to listen to. Far-right groups—from thuggish, nakedly racist street-marching gangs like the British National Party and the English Defence League—came out of the shadows and slurped up public resentment. In the absence of any real opposition from the Labour party, the UK Independence Party—a clique of bankers playing xenophobia for attention and airtime—somehow became a credible political force. They were the only people offering any sort of alternative to craven neoliberal austerity. Unfortunately, their alternative was brazen neo-capitalist nationalism. Throughout the austerity years, the tame tabloids and the king-making Murdoch press—somehow still influential despite years of corruption and collusion scandals that saw editors jailed and almost forced Cameron from office—have blamed it all on immigrants and welfare claimants. Or, just to switch up the headlines, both.


Austerity is never just economic. It is cultural, and it is emotional. The effect has been a gradual narrowing of the arteries where goodwill once pumped around the nation. There has been a slow hardening of hearts, an erosion of hope and energy. I have watched the country where I live become a harder, meaner place. As his party rebelled, as the economic recovery failed to materialize and people started to realise how badly they had been conned, Cameron offered the Brexit referendum as an attempt to placate his base and save his own sorry political hide. He gambled, and he lost, and now he gets to slink away to live on his inheritance.