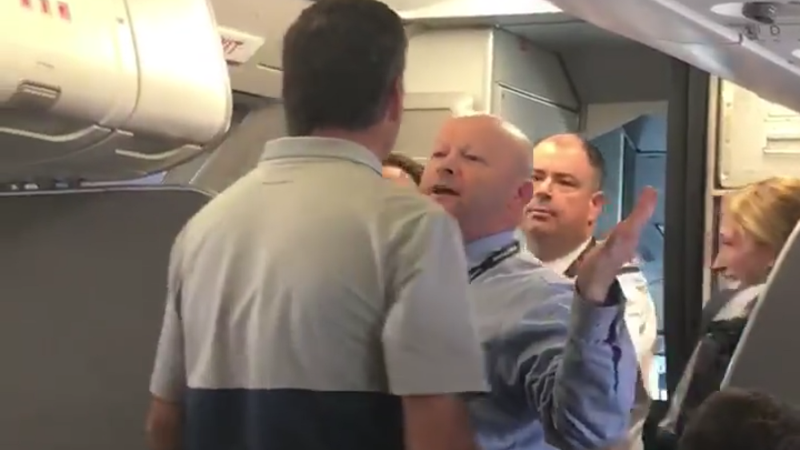 The video starts with the woman already crying at the front of the airplane, holding a child in her arms and asking for her stroller back. You can hear another upset passenger say he’s “not going to sit here and watch this...” before making his way to the front of the plane to confront the flight attendants and ask for the name of the employee that allegedly hit the crying woman. Another woman, seemingly a passenger, also confronts the airline staff about the situation.

Then a man wearing an American Airlines uniform boards the plane and begins talking to the attendants out of earshot of the camera when he’s confronted by the previous male passenger, who tells the employee, “you do that to me and I’ll knock you flat,” before the employee comes across with his finger pointing, warning the passenger to “stay out of it.”

The male passenger gets out of his seat and approaches the employee, and the employee then challenges the passenger to “Try it. Hit me. You don’t know what the story is.” The passenger replies, “you almost hurt a baby!”

American released a statement 20 minutes after the flight landed at DFW:

“We have seen the video and have already started an investigation to obtain the facts. What we see on this video does not reflect our values or how we care for our customers. We are deeply sorry for the pain we have caused this passenger and her family and to any other customers affected by the incident. We are making sure all of her family's needs are being met while she is in our care. After electing to take another flight, we are taking special care of her and her family and upgrading them to first class for the remainder of their international trip.

The actions of our team member captured here do not appear to reflect patience or empathy, two values necessary for customer care. In short, we are disappointed by these actions. The American team member has been removed from duty while we immediately investigate this incident.”