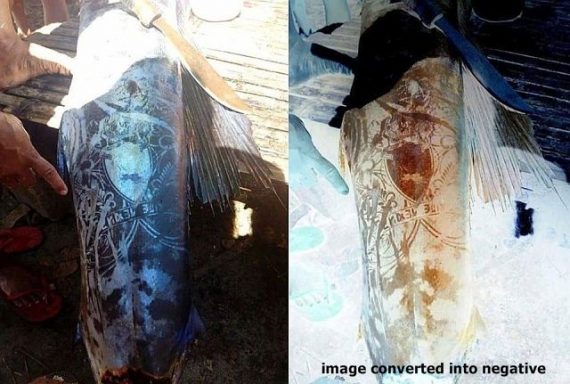 This mysteriously "tattooed" fish was caught near Lopez Jaena in the Misamis Occidental province of the Philippines. Some locals considered the fish a warning from the depths. They're actually right, as the likely non-magical explanation is that the fish was caught in a printed plastic bag floating in the ocean and the pattern transferred to the animal's scales over time. (Mysterious Universe)

According to ABS-CBN, "Zosimo Tano who caught the fish, clarified… that the print on the fish's body came from his shirt, which he used to cover the fish."

Researchers piloting a robotic probe 2,000 feet underwater off Australia's western edge captured this astounding footage of a siphonophore. At an estimated 150-feet long, it may be the longest organism in the ocean. The scientists aboard the Schmidt Ocean Institute's Falkor research vessel also identified more than two dozen new species, collected environmental DNA samples, […]