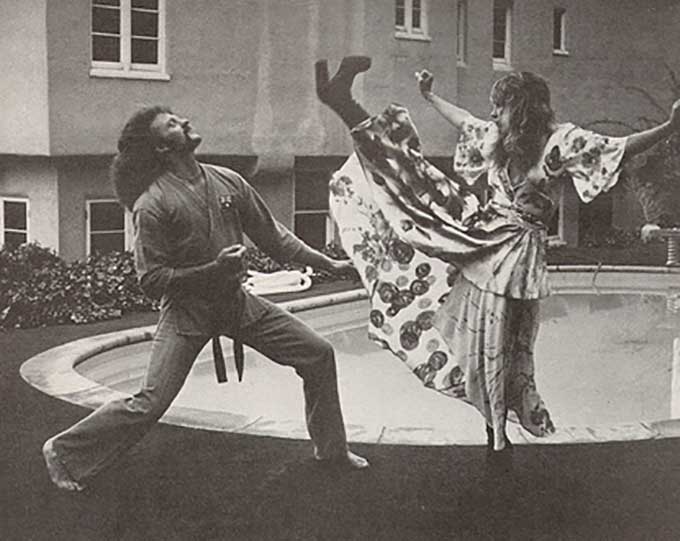 Australian martial arts instructor Bob Jones was a security guard for Fleetwood Mac, The Beatles, The Rolling Stones, David Bowie, Joe Cocker, and others. In 1983 he wrote a book called Hands Off!: A Unique New System of Self Defence Against Assault for the Women of Today. Stevie Nicks happily agreed to be in the photoshoot. Look at that high kick.

Stevie Nicks agreed to take part in a photoshoot where she would help demonstrate the nine mnemonic movements. Jones recalls," This lady was a professional: in two hours I had a hundred of the most magnificent photos ever offered to the martial arts, and just one would make the cover [above]."

"On this day of the shoot I was standing in my martial arts training uniform, wearing my Black Belt. Then Stevie appeared, her hair done to resemble the mane of a lion. She was psyched up for some serious photographing. Stevie wore her familiar thick-soled, thick-heeled, knee-high brown suede kid leather boots. High roll-over socks appeared over the top of these elegant Swedish boots and hung tentatively around her knees." "In these kicking-style photographs the sun also made her dress partially see-through: just enough to be artistically interesting."

This book doesn't mess around:

Texas governor Greg Abbott signed a bill into law “relating to the criminal consequences of engaging in certain conduct with respect certain instruments designed, made, or adapted for use in striking a person with a fist.” The law strikes “knuckles” from a list of prohibited weapons that a person can’t “intentionally or knowingly possesses, manufactures, […]

There are few things more satisfying in life than watching someone who attempted to do something awful being handed their ass by their would-be victim. It’s a good thing the scumbag was wearing a helmet.

Working as a delivery driver is an easy path to a long dark night of the soul. Eight hours of folks wondering why their package wasn’t delivered earlier, miserable traffic conditions and heavy carrying heavy stuff up flights of stairs or wheeling boxes around tight corridors on a dolly and people that won’t get the […]