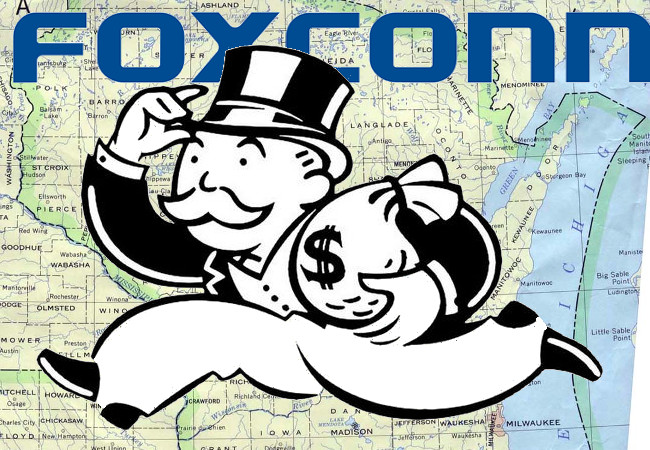 The recent trumpist trumpeting about the plans of Chinese manufacturer Foxconn to open a manufacturing facility in Wisconsin omitted a few key details -- like the fact that Foxconn is being given a sweetheart tax-break that's topped up with 15 years' worth of guarantees of up to $200m/year in cash subsidies at taxpayer expense -- a record-setting taxpayer subsidy that exceeds the previous Wisconsin record-holder by a factor of fifty.

The total bill for this incentive package that Wisconsin is giving the super-profitable Chinese manufacturer? Three billion dollars.

But there's more! Wisconsin cities will also have to provide incentives, including hundreds of millions more in infrastructure, and exemptions on environmental rules that will allow Foxconn to pollute watersheds, drain water habitats, and reengineer Wisconsin's freshwater sources, up to and including Lake Michigan.

Speaking about critics of the deal on a radio broadcast, Wisconsin governor Scott Walker said, "they can can go suck lemons."

*
Exempt the project from an environmental impact statement. The state Department of Natural Resources conducts impact statements for large projects, with recent examples including the proposed golf course by the Kohler Co.
Allow the company or its contractors to discharge dredged material and fill into wetlands without state permits, though federal permits could still be required. The legislation would also exempt Foxconn from a requirement that companies try to avoid filling wetlands when possible, though the firm would have to restore wetlands elsewhere if it did.

*
Let the company build on a riverbed or lakebed, connect artificial bodies of water with natural waterways and change the course of streams without getting state permits. The Foxconn plant is expected to need large amounts of water from Lake Michigan.

*
Exempt the project from having to get certain approvals from the Public Service Commission, authorize lower utility rates for Foxconn for at least 10 years and allow transmission lines to be relocated without state approval.
Provide a major undisclosed tax credit package to Brookfield financial services company Fiserv to keep the company headquarters in Wisconsin.