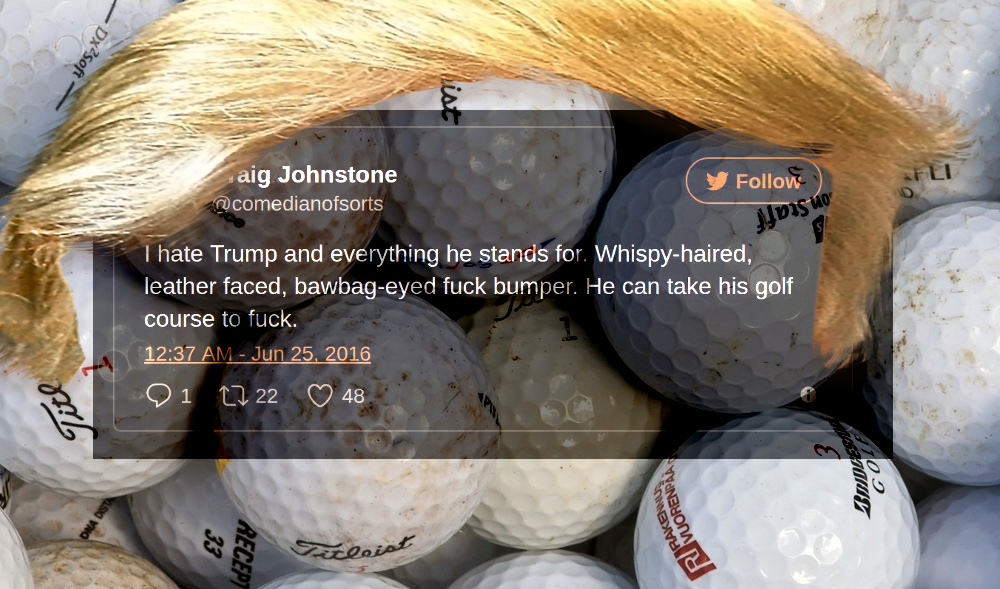 Trump's Scottish golf courses are hemorrhaging money (they lost $1.8M in 2015) and the only way they can be profitable is if they're allowed to expand, but that's almost certainly not going to happen.

That's because Scottish Environment Protection Agency and Scottish Natural Heritage have said they'll officially object to the planning variances that Trump would need to expand the businesses. Trump bought his plots of land without bothering to understand the planning restrictions that governed them, and then just tried to doze his way through the rules to get what he wanted.


But Trump's plans -- building massive, squalid timeshare units -- are incompatible with the existing land-use plans and those can't be easily changed; what's more the environmentally sensitive nearby dunes keep kicking up sand-storms that render his courses unplayable, and the dunes can't be touched without disturbing protected habitats.

Though Trump has pointed to his Scottish courses as evidence of his international popularity, in reality he has generated a lot of bad blood in the country where his mother was born. Long before Trump ran for president, a move that was not popular in Scotland, he had already managed to alienate locals by feuding with his neighbors, whose land he aggressively tried to buy, and bickering with local planning authorities.

At one testy meeting, Trump was apparently startled by a local planning official who accused him of not researching the limits of the property before he bought it.

“You know, nobody has ever told me before I don’t know how to buy property,” he snarled. “You’re the first one. I have done very well buying property. Thanks for the advice.”