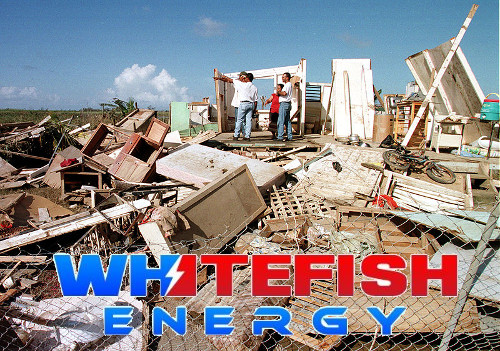 When mainland US cities like Houston and Miami get hit by hurricanes, they rely on mutual aid deals with out-of-state and Canadian power authorities to rebuild, as hundreds of skilled maintenance workers flood in and work for free to get their grid up and running; but debt-crushed Puerto Rico is paying $300 million to Whitefish Energy, a two-person company from Trump Interior Secretary Ryan Zinke's hometown of Whitefish, Montana.

Whitefish is billing $330/hour for in-house site supervisors and $227.88 for in-house "journeyman linemen." The subcontractors (eg everyone, given the company only has two employees) bill at $462/hour for supervisors and $319.04/hour linesmen. They bill $332/worker/night for hotel rooms and $80/day/worker for food.

Zinke is at the center of a string of scandals, including flying to a $5000/head GOP fundraiser at taxpayer's expense.

PREPA did not reach its agreement with Whitefish until Sept. 26, six days after the storm swept through. By comparison, the Florida utility FPL requested mutual aid before Hurricane Irma hit. The result was an army of nearly 20,000 restoration workers, including FPL employees, from 30 states and Canada at work on the first day.

On Oct. 1, FPL had teams assembled to assess damage in Puerto Rico. It posted notices in Spanish and English on its Facebook page: "FPL is ready to help Puerto Rico." Florida Gov. Rick Scott mentioned the offer in a news release.

The Florida utility says it never received a reply. The Puerto Rican utility has not replied to offers of assistance from mutual-aid partners, according to the American Public Power Association, which coordinates such operations.