Online simulation of a ripple tank 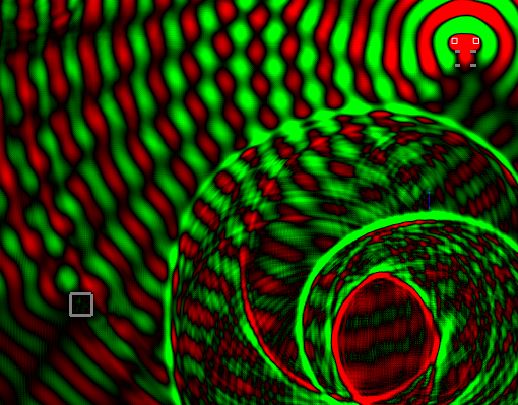 You like wave dynamics, right? And things simulated in web browsers, right? Well, here's an online simulation of a ripple tank, which I've been playing with for twenty minutes and which I fully expect will keep me busy until lunch. [via]

This is a simulation of a ripple tank. It demonstrates waves in two dimensions, including such wave phenomena as interference, diffraction (single slit, double slit, etc.), refraction, resonance, phased arrays, and the Doppler effect.

To get started with the applet, just go through the items in the Example menu in the upper right. You can also draw on the screen with the mouse. The predefined setups are just starting points; you can modify the sources and walls as you desire.

3D teapot where each vertex is a 3D teapot

My masterpiece, a teapot, but each vertex is another teapot. If this isn't art then IDK what is. pic.twitter.com/44RXpEH2oT — Joseph Whittington (@the_whittington) January 27, 2020 Game developer Jospeh Whittington took the classic 3D teapot to its fractal conclusion: it’s made of 3D teapots.

Dynaflash is a projector that maps a moving, deforming surface at 1000 frames per second, meaning that it can cast a stable image on it no matter how wild its gyrations. One caveat: it requires the target surface to have an invisible infrared grid on it. Our method can obtain the deformation robustly at 1,000 […]

Graphic designer Reagan Ray compiled more than 100 logos of videogame consoles from 1976 to 2017. (Just a handful seen above.) Oh how I miss the days of the, um, Fairchild Channel F and the Bandai Playdia. Ray writes: This list covers the second (1976) through eighth (present) generation consoles. According to Wikipedia, there were […]