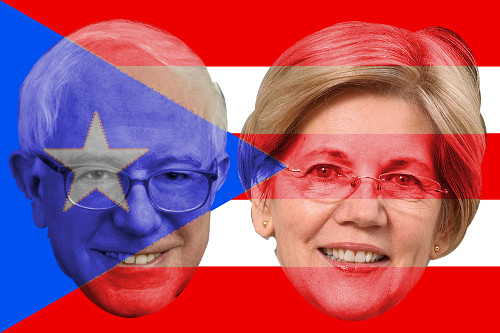 As vulture capitalists and profiteers circle the devastation in America's hurricane-struck island colonies, the Trump administration has nothing for them but more loans to pile onto their existing, crippling debt (even as affected mainland cities where more white people live get direct government aid).

But the left wing of the Democratic Party has articulated a different vision for the future of the American citizens who live in these places: a "messaging bill" proposing $146 billion in aid to the islands, accompanied by debt forgiveness, in a package they call "A Marshall Plan for Puerto Rico."

Elizabeth Warren is especially strong on the question of Puerto Rico's debt, stating, "The vulture funds that snapped up Puerto Rican debt should not get one cent from the island, not one cent."

Sanders also pointed out that unlike Texas and Florida, which suffered natural disasters recently, “the people of Puerto Rico and the people of Virgin Islands, while being full American citizens, they have no United States senators here to represent them,” and “they do not have full voting members in the U.S. House.”

And the Boricua voice in Congress will soon suffer a further loss as Puerto Rican member and outspoken advocate, Rep. Luis Gutiérrez, D-Ill., announced on Tuesday he won’t seek re-election but has plans to help rebuild the hurricane-ravaged island.

For decades in Congress, when Sanders introduced a bill, he tended to do so alone. And when he launched his presidential bid, it was more of a solo protest effort rather than as the leader of a movement. But Sanders has become much more of an organizer, and, as he did with his Medicare for All bill, unveiled his Puerto Rico effort with an influential group of lawmakers, including three — Sens. Kirsten Gillibrand, D-N.Y.; Kamala Harris, D-Calif.; and Warren — routinely floated as 2020 presidential candidates.