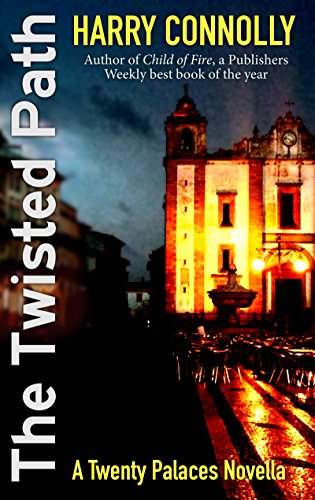 Harry Connolly's Twenty Palaces series is one of my favorite new storylines in science fiction. After a several year hiatus Harry has brought back Ray Lilly, and all the magic in The Twisted Path.

The Twenty Palaces series tells the tale of Ray Lilly, a former convict turned into a magician's decoy, or Wooden Man. It is Lilly's job to distract evil creatures from the deep and dark, while his master Annalise burns them with primal green fire. They keep on saving the world from some pretty nasty demons that have crossed over.

Wooden Men aren't supposed to last more than one mission, but somehow Ray keeps on surviving. The Twenty Palaces Society has taken notice and calls Ray and Annalise to Europe, this does not bode well.

Connolly's Lovecraft-ian/Geiger-style lore and world building is amazing. I have enjoyed all of his novels and novellas, but none have been as anticipated as The Twisted Path. If you are new to this series, I highly recommend starting with Child of Fire, the which was also Harry's debut novel.

Ray and Annalise' return is every bit as exciting as I'd hoped.

The Twisted Path: A Twenty Palaces Novella by Harry Connolly via Amazon