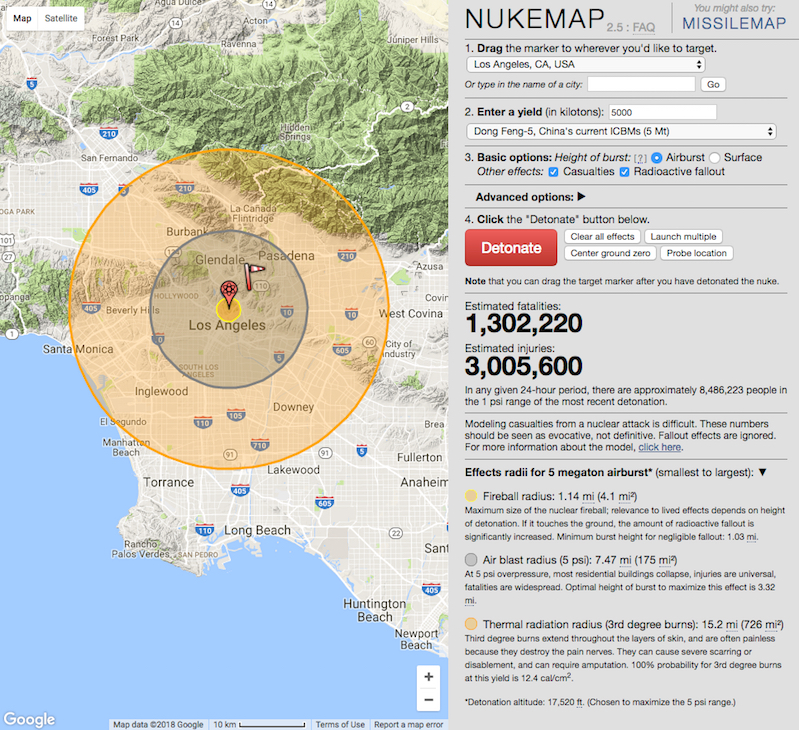 In these troubled times, Alex Wellerstein's interactive Nukemap allows users to survey the damage of various kinds of nuclear bombs aimed at major cities worldwide. In this example, a typical Chinese nuke hitting downtown Los Angeles would kill 1.3 million and injure another 3 million.

The NUKEMAP model, as I discuss in its FAQ, isn't perfect by any means: in some circumstances it probably overestimates the effects (by not taking into account a lot of local variables), in others it probably underestimates them, and the "real world" is much more chaotic than a simple model that can run in your browser can account for, no doubt. But it helps to concretize the experience, the order of magnitude. I think there's a lot of value in that, when we're talking about something so removed from everyday human experience (thank goodness) as a nuclear weapon detonation.

And I think this is a model we need to really do more to export to other domains: nukes are one thing in our society that people have trouble really understanding on an intuitive level, but there are plenty more. This is what my "Visualizing Society" class is all about, at its core: finding ways to make interactive data visualizations or simulations that shed light on complex real-world issues. The technical bar for doing these things is lower than most people realize; if I can teach undergraduates (very good and often technically-inclined undergraduates, to be sure, but often ones with no coding experience) the basics of this over the course of a semester, then it can't be that hard.

If that wasn't terrifying enough, check out MissileMap to see how far these payloads can travel.

“The blessing of military weapons is not reflected in the tradition of the Orthodox Church and does not correspond to the content of the Rite,” reads a new document on the website of the Moscow patriarchate of the the Russian Orthodox Church. Russian priests should stop blessing nuclear weapons and other weapons of mass destruction […]

The Los Angeles Times has a harrowing new story about Enewetak Atoll in the Marshall Islands. Japanese forces invaded the small Pacific nation and its residents during World War I, and the United States did the same during World War II under that classic guise of “liberation.” But the US was hardly acting altruistically, at […]

Happy nuke year, everyone! Man, the Trump administration’s recklessness really makes people feel like they can just say whatever they want with no consequences.