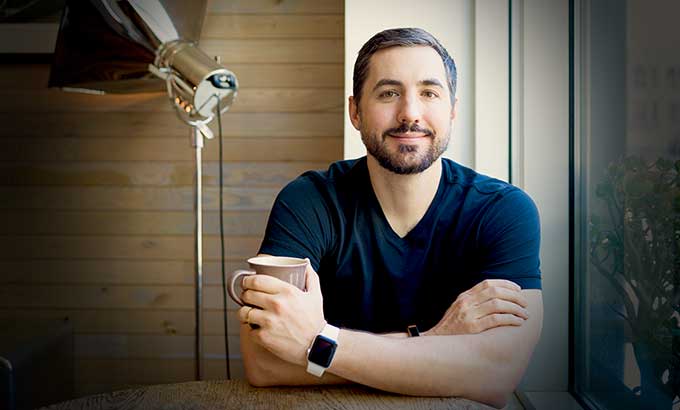 My guest on the Cool Tools podcast this week is Kevin Rose. Kevin is a serial entrepreneur and product builder, having founded the social news site Digg in 2004. Later Kevin pursued a career in venture investing, investing in companies like Medium, Ripple, and Blue Bottle Coffee while at Google Ventures and is now investing at True Ventures.

“I had taken a couple stationary bike classes and the ones that you actually have to go in person, but then I had a buddy of mine, that was like you don’t understand, these classes are a lot of fun, they really motivate you, you can do it your house, and for me that just sounded like, okay, I’ll give it a shot, and I went and tried it at a friend’s house, and I got hooked, purchased one, and for a geek it's awesome because you get all the really detailed analytics on the screen there post workout, and then it's all live streaming classes, so like when you're in a class the instructors will call you out by name sometimes, and there's all different types of instructors depending on your music style and likes, so I've just found it to be a great way — if you have an extra half hour — to just jump on for 20 minutes and get a work out in." [Note: True Ventures, the venture capital firm Kevin Rose works for, is an investor in Peloton.]

"I've been into habit tracking apps, but they always kind of fall off, but as a data junkie, and kind of a geek, I really like to see and be held to certain habits, so I like to see like completion rate, and progress indicators, and little charts and graphs. This is just a really beautiful and simple habit tracking app. So for me, I set up daily habits that would be say “meditation” and there’ll be habits that I want to happen three times a week, like "cardiovascular exercise", or taking certain vitamins three times a week, things like that, and so this is just my go to app for all things habit tracking."

“I've tried both the TREZOR and the Ledger, and I wanted a place to have a physical device that is required to unlock your wallet, so that, that means, you know if I lose my laptop, or wherever I'm storing my cryptocurrency, you have to have this device along with a PIN code to authorize any transactions, any sending of any of your coins or tokens. The reason I went with Ledger though versus TREZOR is just the amount of companion apps and kind of built in coins that they support. I’m looking at their site right now, it looks like they support close to 30 different coins, and that was more than TREZOR.”

“A little hobby of mine is fermenting vegetables, and I’ve done this with a whole variety of different stuff. [I] started with sauerkraut, and I’ve done pickles, and things of that nature, but it’s always kind of a pain, it's difficult in that these things are expelling gases, and you always have to keep everything submerged the right way, and this was a device that I had found probably a year ago called The Easy Fermenter that really makes it easy. You buy these little glass weights that sit inside of any standard mason jar, so it keeps all of your vegetables submerged beneath the brine, and then all you do is just screw on this lid that has an automatic exhaust valve to allow the gases to escape, and it’s as simple as that.”