Gothamist unionized and its evil Trumpist billionaire owner shut it down; now public radio is bringing it back 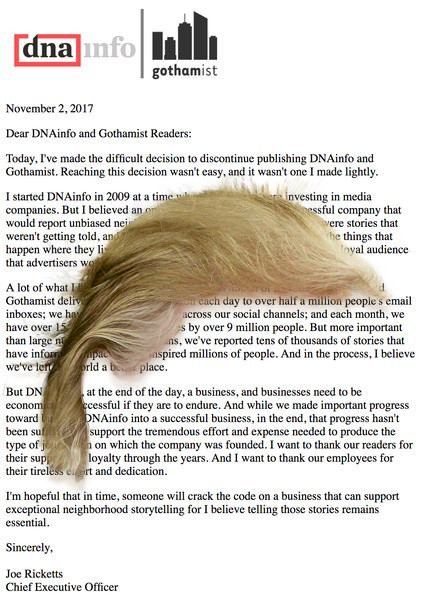 Last November, evil Trump-supporting billionaire Joe Ricketts shut down Gothamist (and its sister sites) to punish its staff for forming a union.

Dobkin characterizes the acquisition as "the best possible outcome" following Gothamist's unceremonious closure, which infuriated much of the media industry. Ricketts' controversial decision to shut down the sites came months after DNAInfo acquired Gothamist, and just one week after the combined newsroom successfully unionized. As an added blow, Ricketts initially blocked access to the archives of both sites, replacing them with a letter announcing that he had turned off the lights.

Gothamist Lives, Thanks to a Boost From Public Radio [Issie Lapowsky/Wired]