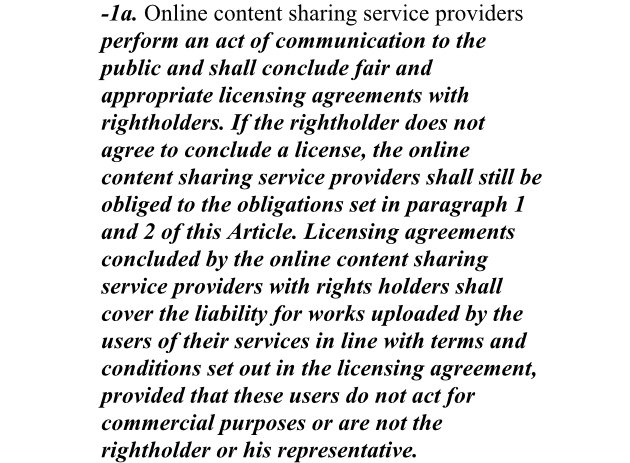 For months, the European Parliament has been negotiating over a new copyright rule, with rightsholder organizations demanding that some online services implement censoring filters that prevent anyone from uploading text, sounds or images if they have been claimed by a copyright holder.

These filters -- branded #censorshipmachines by activists -- were hugely controversial: even when used as intended, they make no allowances for fair dealing and other limitations to copyright. Beyond that, they are ripe for abuse, incentivizing trolls and censors to register materials as a means of keeping them off the internet, regardless of whether they hold any relevant copyrights.

Thankfully, the filters had been largely erased from the negotiating drafts, thanks to vigorous debate and activism. But last week, German MEP Axel Voss, rapporteur for the Copyright Directive, introduced a new draft that brought the filters back, and imposed them on virtually every kind of online platform, vastly expanding their scope beyond the worst drafts of the earlier proposals.

What's worse, Voss apparently didn't author this draft: according to the Word metadata in the document, it was authored by an unelected European Commission bureaucrat who has previously advocated for the filters.

A huge scandal is brewing in the European Parliament on the #CensorshipMachines. Last week, rapporteur @AxelVossMdEP had shown signs to drop the harmful filtering obligation. Now it’s back, and it’s worse than ever. Read it here: https://t.co/ejmGCcwgLU #FixCopyright