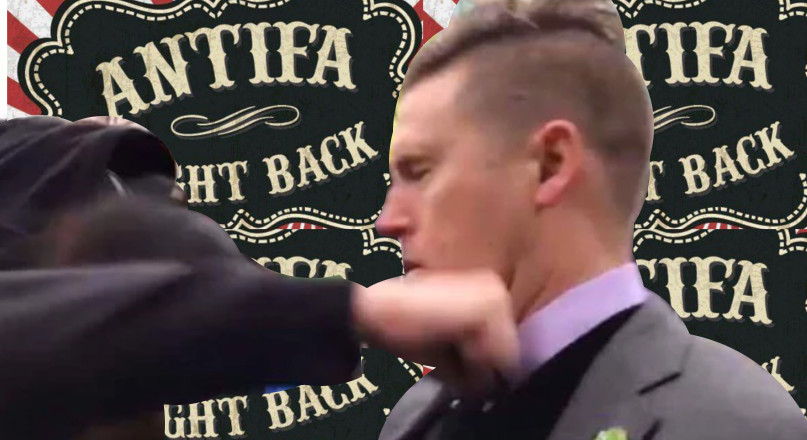 Elements of the left say that antifa tactics -- direct, physical confrontations with fascists and racists -- are a "gift to the alt-right," letting them play victim and validating their paranoid fantasies about the persecution of white dudes -- but punched Nazi Richard Spencer says that antifa tactics have worked as intended, making it impossible for him to continue his on-campus recruitment tour for his forthcoming race-war.

Spencer's admission of antifa's victory was part of a long, dull Youtube video he posted last Sunday, in which he announced the premature end of his "college tour," because "When they become violent clashes and pitched battles, they aren’t fun," adding, "Antifa is winning to the extent that they’re willing to go further than anyone else, in the sense that they will do things in terms of just violence, intimidating, and general nastiness."

Spencer’s latest message suggests the very opposite. “The idea of a college tour was going into the belly of the beast — going into academic, Marxist-controlled territory — and giving a speech that introduces that basic ideas of identitarianism and the ‘alt-right,’” he said in his video, emphasizing the use of “public-facing” events to spread and normalize the “alt-right” message. Anyone who has watched Spencer and his ilk in public debates with liberals on the question of race should see how the belief that his violent white supremacy can be reasoned away is flawed. He sticks to his guns about the necessity of a white “ethno-state,” and his liberal interlocutor calls him a monstrous racist. The result is that anti-racists agree with the liberals and racists agree with Spencer. The effect, as both sides hold to their arguments, is mere entrenchment of an intolerable status quo — or, worse yet, closet racists decide Spencer’s arguments license them to come out publicly, too.

Instead of this deteriorating stalemate, the antifa strategy aims to create material, felt consequences for neo-Nazi, white supremacist groups, and those who would organize with them. The approach takes seriously that young, white, often alienated men see promise, belonging, and elevation in these organizations. They don’t join groups like Identity Evropa, an American white supremacist group which has focused heavily on campus propaganda, because of the strength of their arguments — and they won’t leave such communities because of the flawed logic of their ideology, either.

Remember back in 2017, when the entire Right Wing Propaganda Machine suddenly decided that Antifa — literally just some loose affiliations of scrappy anarchists in black bloc attire — were the single greatest threat that humanity had ever faced? (And were also somehow being funded by Hillary Clinton and the DNC and George Soros even […]