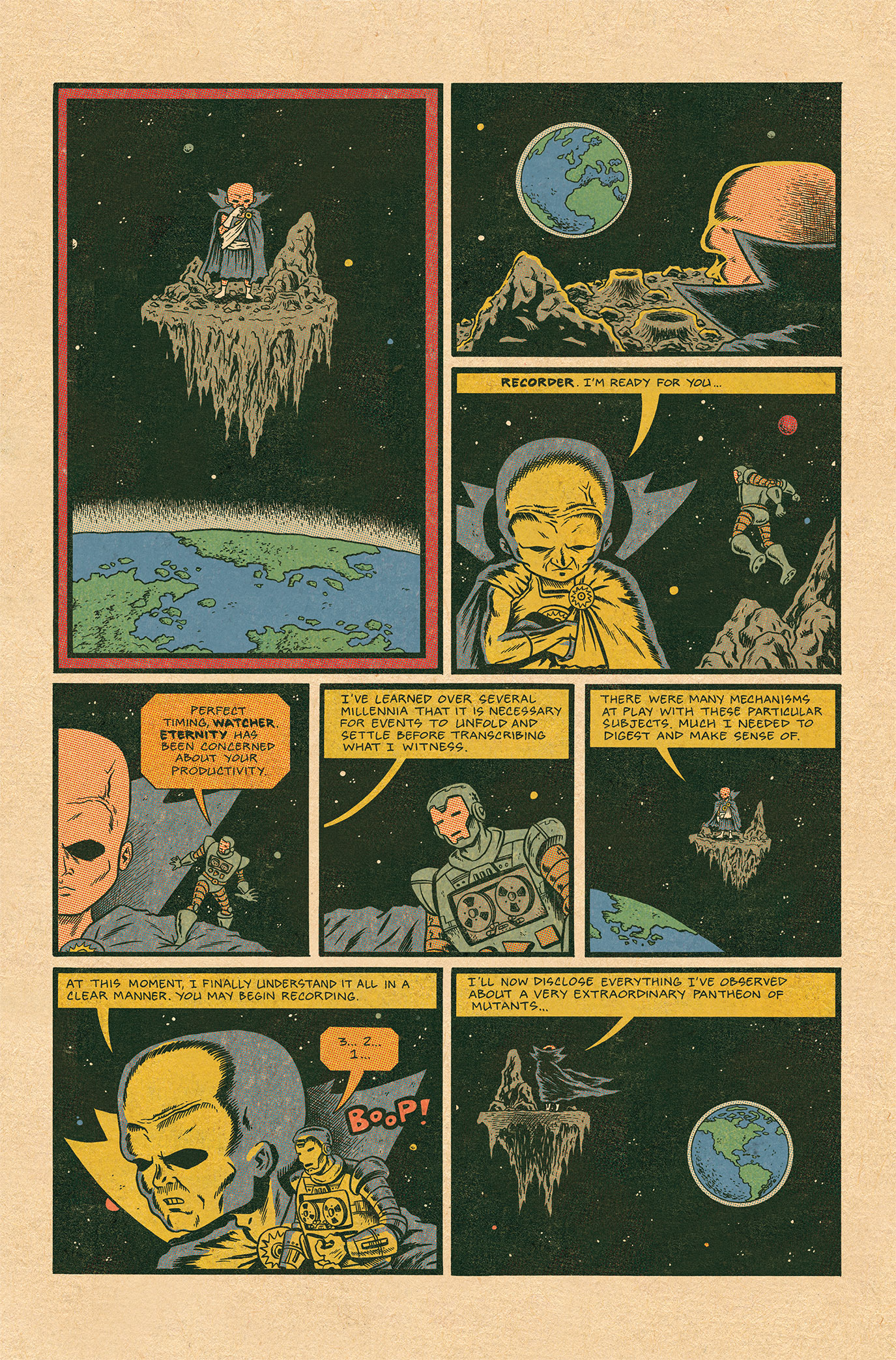 One of my cardinal rules for purchasing comics as a lad was never to buy a story that was halfway through being told. If I saw “Part 3” on the cover or splash page I was out. This left few options, but one consistent purchase was Marvel’s What If… volume 2 (early 1990s). The conceit was that Uatu The Watch would stand-in as defacto EC horror host, a la The Crypt Keeper, and give us an alternative-reality tale of a famous Marvel story (Example: What if...The Fantastic Four fought Dr. Doom without their powers?). I always held a personal geek-theory that Uatu was the narrator of all those ethereal caption boxes that permeated the pages of Marvel comics. In X-Men: Grand Design I used the opportunity to make this theory into law. Using The Watcher is also the perfect device for jumping around through the complicated X-Men lineage to connect dots and make correlations along the way.

Panels 1 & 2 are silent because I want the reader to decide the exact amount of time that Uatu has been standing on that rock observing the happenings on Earth. The time that transpires between panel 1, 2, and 3 can be seconds, minutes, years, decades, centuries, millennia, etc. Your call. This illusion would have been destroyed if I had any dialogue in those panels as it would imply that the image exists as a moment that lasts only as long as it takes to read the text within.

Panel 3 and the rest: The Recorder! My introduction to the Recorder was from his cameo in Uncanny X-Men 137 and he was drawn so tiny >(and kind of unclearly) that there was plenty left up to the reader’s imagination. I didn’t realize he was a classic Jack Kirby character until much later. My version of The Recorder here is how I imagined him to look before I read the Kirby Thor comics where he was introduced. It was the ‘80s when I saw that classic issue of X-Men which would explain why the recorder uses analog means for warehousing data as opposed to solid-state media.

One last formal thing worth noting is that when you look at Uatu’s positioning in every panel I wanted to imply that he was slowly orbiting the earth while conducting his observations. He’s not up there statically in place. He looks at the story in all angles.

The first X-Men Grand Design collection is now available for purchase on Amazon, with X-Men: Grand Design, Second Genesis already up for preorder. Stay tuned for another strip this time next week!