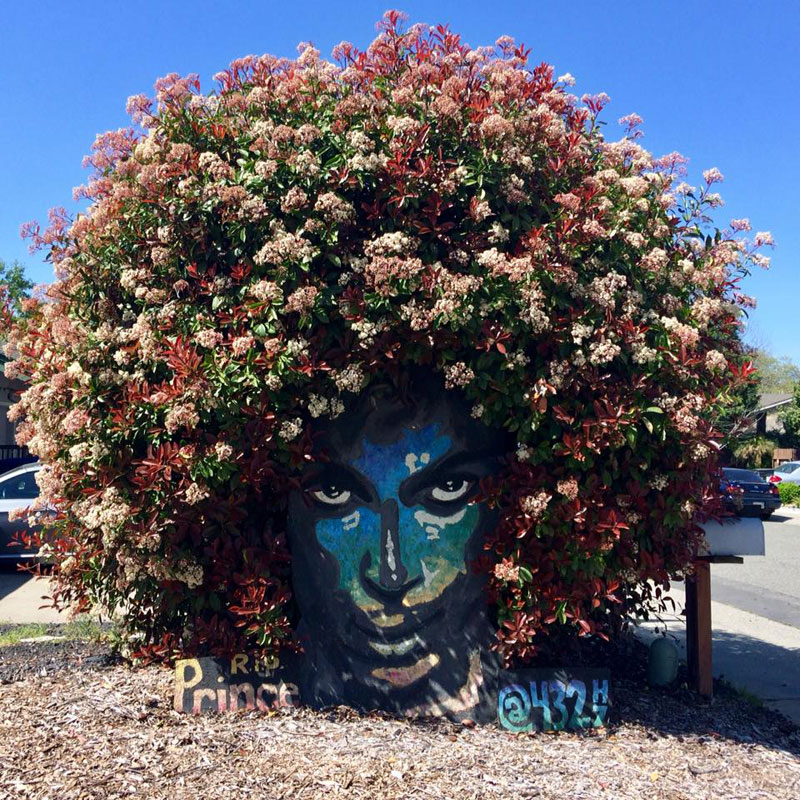 When Prince died in 2016, California artist Christine Stein painted a piece of plywood in the likeness of the late artist under a shrub outside her Citrus Heights home.

Two years later, the shrub is in full bloom and Prince fans are now making the pilgrimage to visit it, according to KTVU:

The bush – specifically, a Red-Tip Photinia – appears perfectly around Prince’s head, and looks like a flowery halo of hair. Her husband is supposed to trim the bush, but hasn’t in a year, which is why the bush has grown so large.

Stein... thought the image was so stunning that she posted in on Facebook on Easter. The post went viral... and the news trucks – and the Prince pilgrims – have been flocking to her home ever since.

“I’ve had people from LA, Minnesota, and Georgia come to my house and lay down in the driveway,” Stein said. “They leave their own art. Someone from Anchorage just called me to say they’re coming to visit.”

On the one hand, she said she finds it “kind of creepy” to find people “worshipping” Prince on her property.

But on the other hand, she also wants to conjure up the altruistic spirit of Prince, who had supported many charities and acted with kindness and generosity throughout his life, much of which had remained private until his death in 2016.

You can get a print of the flowering mural for $10 over at Stein's Etsy shop.