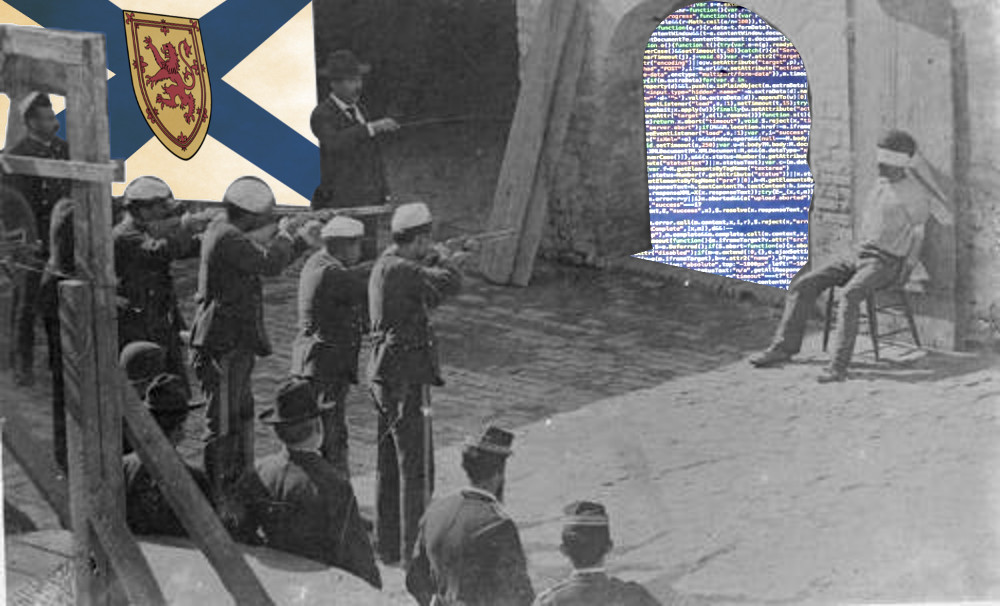 A 19 year old in Nova Scotia wanted to learn more about the provincial teachers' dispute, so he filed some Freedom of Information requests; he wasn't satisfied with the response so he decided to dig through other documents the province had released under open records laws to look for more, but couldn't find a search tool that was adequate to the job.

He noticed that the URL for the response to his request ended with a long number, and by changing that number (by adding or subtracting from it), he could access other public documents published by the government in response to public requests.

So he wrote a one-line program to grab all the public records, planning on searching them once they were on his hard-drive. On Wednesday morning, 15 police officers raided his home, terrorising his family (including his very young siblings -- they scooped one of his younger brothers up as he was walking home from school, arresting him on the street) and seizing all the family's electronics, including the phone and computer his father depends on for his livelihood. The young man now faces criminal charges and possible jail-time.

This is eerily similar to what happened to Aaron Swartz when he downloaded millions of public court records with the intention of making them available for free -- only to discover that the courts had routinely failed in their duty to redact sensitive information before making their transcripts available to the public.

When Aaron outed the US courts for failing to take due care with the documents they were meant to be published, revealing that criminals could have been stealing personal information and tracking stalking targets for decades, the FBI came after him.

Ultimately, Aaron beat that case, but made enduring enemies of the FBI and the prosecutors who made fools out of themselves by targeting him and then refusing to back down, and that may have led to the malicious, vindictive prosecution that ultimately cost Aaron his life.

Let's hope that Nova Scotia's law enforcement and prosecutors have the good sense to thank this young man for pointing out their reckless mishandling of the public's sensitive information and apologise profusely for having terrorised him rather than giving him a certificate of appreciation.

She says the family is still working through the mess they left behind.

"They rifled through everything. They turned over mattresses, they took drawers and emptied out drawers, they went through personal papers, pictures," she said. "It was totally devastating and traumatic."

She says police seized her son's computers, plus her husband's cellphone and work computers, which has left him unable to do his job.

They also seized her younger son's desktop computer, after he was arrested on the street walking to high school.

Officers took her 13-year-old daughter to question her in a police car.

"My little ones are asking, 'Will I be able to get a job because we were arrested?'" she said.

The 19-year-old accused says he's been passing his time watching TV and doing paper crosswords because he's not allowed to access the internet.