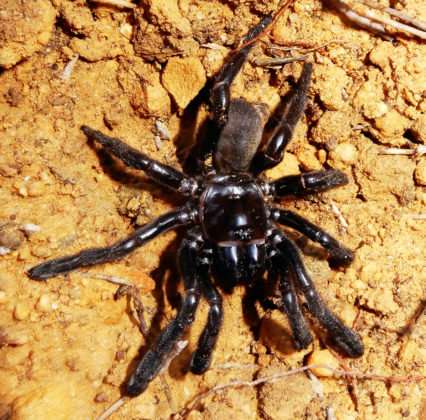 This female trapdoor spider, named Number 16, was the world's oldest known spider. A lifelong resident of the Australian outback, she has just died at age 43. From Curtin University:

Lead author PhD student Leanda Mason from the School of Molecular and Life Sciences at Curtin University said the ongoing research has led to new discoveries about the longevity of the trapdoor spider.

“To our knowledge this is the oldest spider ever recorded, and her significant life has allowed us to further investigate the trapdoor spider’s behaviour and population dynamics,” Ms Mason said.

“The research project was first initiated by Barbara York Main in 1974, who monitored the long-term spider population for over 42 years in the Central Wheatbelt region of Western Australia.

“Through Barbara’s detailed research, we were able to determine that the extensive life span of the trapdoor spider is due to their life-history traits, including how they live in uncleared, native bushland, their sedentary nature and low metabolisms.”