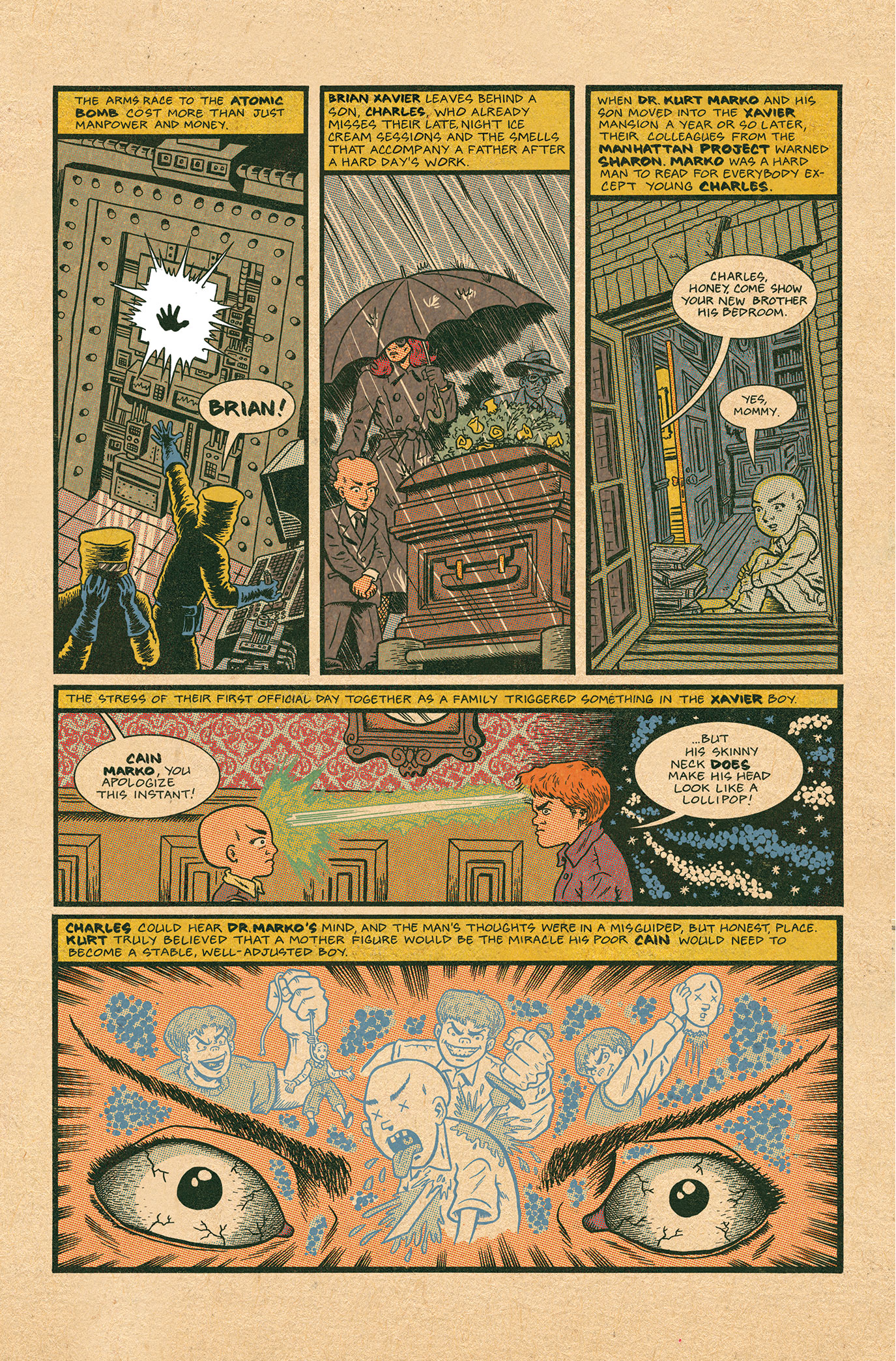 Every comics page is just an accumulation of many, many drawing choices and once a cartoonist puts pencil to paper, the world of that strip begins to solidify more and more. I think the idea of someone being able to read another’s thoughts is just about as creepy as can be and keeping Charles Xavier bald as a boy adds to sell his idea. He looks like a little humanoid alien from Outer Limits something. I suppose I also liked the idea that the Peanuts character, Charlie Brown, was a bald-headed boy so that created a precedent for my youthful Charlie X.

Panel 3: I knew what I was getting into when I endeavored to begin making an X-Men comic. For one thing, I knew I was going to have to draw lots and lots of victorian mansion interiors thanks to the Xavier School of Gifted Youngsters. I made sure to get plenty of practice in before drawing the actual comic. The color scheme of this panel is noteworthy as an example of a Kubert School assignment that we first year art students had to do when studying color-theory: create an illustration using predominant cool colors or warm ones and accentuate the image with one color from the opposite side of the color wheel. I thought it was a lame, gimmick assignment as a student but rejoiced to find it applied well to this image.

Panel 4: The diss from the red-headed step brother is a classic schoolyard snap. The true version contains a copyright I didn’t feel like sending to the Marvel legal dept. “ Your head's so big and your neck’s so skinny you look like a Dum Dum™ lollipop.” Use it on someone next time you wanna deflate take the wind out of their sails. It works.

Panel 5: My impulse was to go Tim Vigil with Cain Marko’s murder fantasies but, alas, Marvel is Disney and I didn’t feel like redrawing things if I gave the editor a heart attack.

Welcome Ed Piskor back to Boing Boing (previously), where he’ll be offering an annotated page-by-page look at the first part of X-Men: Grand Design, his epic retelling of how Marvel comics’ pantheon of heroes came to be. Here’s page 4; read the rest first — Eds. Director’s commentary If this were an Avengers comic, Captain […]

Welcome Ed Piskor back to Boing Boing (previously), where he’ll be offering an annotated page-by-page look at the first part of X-Men: Grand Design, his epic retelling of how Marvel comics’ pantheon of heroes came to be. — Eds. My work on X-Men would never have been possible without the popularity my work has achieved […]