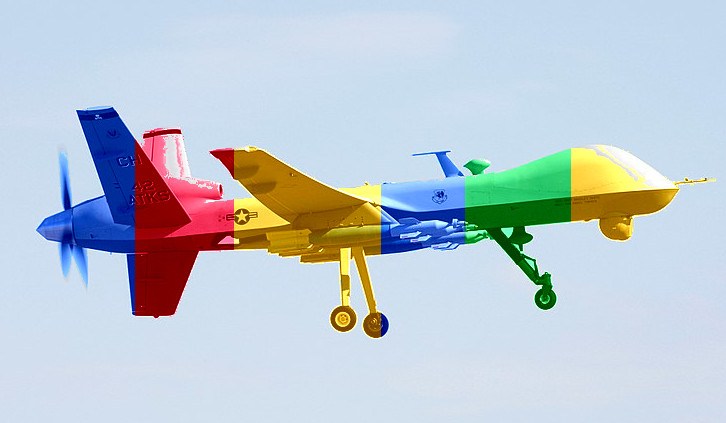 Google's decision to provide AI tools for use with US military drones has been hugely controversial within the company (at least a dozen googlers quit over it) and now the New York Times has obtained internal memos revealing how senior officials at the company anticipated that controversy and attempted (unsuccessfully) to head it off.

One memo was written by Google Cloud's chief AI scientist, Fei-Fei Li, in response for a request on advice for how to spin the deal: "Avoid at ALL COSTS any mention or implication of AI... Weaponized AI is probably one of the most sensitized topics of AI — if not THE most. This is red meat to the media to find all ways to damage Google."

Google and its parent company Alphabet still get the vast majority of their earnings from advertising, and there is strong internal pressure to diversify the company's revenue, especially in light of the techlash and the changing public attitudes towards surveillance capitalism.

But googlers who were drawn to the company in part due to its "Don't Be Evil" motto and reputation for mixing a public mission in with service to its shareholders are widely opposed to supplying services to the US military, especially when it comes to the drone program, which has killed a literally uncounted number of civilians -- as well as military targets far from the battlefield.

Executives for Alphabet's Deepmind division have outright refused to work on any military contracts. Googlers have been sticking "DO THE RIGHT THING" stickers all over the company's New York City offices and an engineer tried to get a conference room renamed after Clara Immerwahr, the German chemist who committed suicide when she learned that her husband, Fritz Haber, had developed chemical weapons for Wehrmacht.

Google has hosted a series of debates between Google Cloud CEO Diane Greene, TCP co-inventor Vint Cerf (a former defense contractor who serves a Google's Chief Internet Evangelist) and Meredith Whittaker (previously) a privacy activist who is a senior AI researcher at Google.

I've written before that tech workers are an undervalued resource in the fight for better tech. They work in an extremely tight labor market and have more power than we're accustomed to employees exerting in the 21st century, and many of them were attracted to tech out of a sense of civic duty to build something that would make the world a better place.

Others are starting to target tech workers in their pitch for better tech, from Congressional committees to Freedom From Facebook to Yelp, companies and campaigners are reaching out to techies as allies.

When news of the deal leaked out internally, Ms. Greene spoke at the weekly companywide T.G.I.F. meeting. She explained that the system was not for lethal purposes and that it was a relatively small deal worth “only” $9 million, according to two people familiar with the meeting.

That did little to tamp down the anger, and Google, according to the invitation email, decided to hold a discussion on April 11 representing a “spectrum of viewpoints” involving Ms. Greene; Meredith Whittaker, a Google A.I. researcher who is a leader in the anti-Maven movement; and Vint Cerf, a Google vice president who is considered one of the fathers of the internet for his pioneering technology work at the Defense Department.

Because there was so much interest, the group debated the topic three times over one day for Google employees watching on video in different regions around the world.

According to employees who watched the discussion, Ms. Greene held firm that Maven was not using A.I. for offensive purposes, while Ms. Whittaker argued that it was hard to draw a line on how the technology would be used.