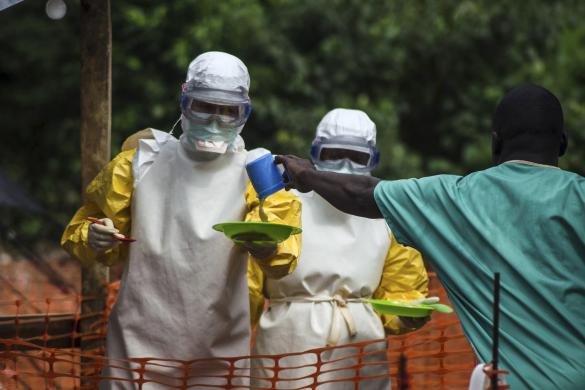 Over the weekend, the AFP News Agency reported that health professionals in the Democratic Republic of Congo have uncovered five new confirmed cases of Ebola: three cases in the Bikoro area and two in Wangata. This most recent outbreak of the disease in the country's northwest has resulted in more than 50 confirmed cases and 25 deaths. These numbers, of course, only reflect the incidents of the disease that health agencies such as the World Health Organization and Medecins Sans Frontieres and DR Congo's healthcare system are aware of.

As such, the push to track everyone who has come into contact with the disease and take appropriate precautions continues, albeit slowly. One of the biggest hurtles in tracking and containing Ebola is that, logistically, the rural regions of DR Congo are a pain in the ass. The roads are often so pocketed with potholes that the only way to reliable traverse them is with a motorcycle—and that's if there are any roads at all. Many of the smaller villages surrounding Bikoro are packed away by dense jungle. Additionally, cellular coverage in the country's northwestern region comes with massive holes. This makes doing important work, such as sending field operatives into areas of infection, shipping vaccines or sending collected data back for processing extremely difficult.

According to the New York Times, because of these difficulties, researchers are having a hard time piecing together how the current strain of the virus was transmitted. This, in turn, makes vaccinating the right people in the hopes of stopping the spread of the disease an uphill battle. Currently, the priority is on identifying and isolating anyone in and around the city of Mbandaka who may have come into contact with Ebola. The why of it is that Mbandaka is only 500 miles down river from DR Congo's capital city, Kinshasa. Were Ebola to spread to the capital region, the disease would become much more difficult to contain.

Mbandaka is a priority because it is a traffic hub. The Republic of the Congo lies just across the Congo River, and Kinshasa, Congo's capital of 10 million, is less than 500 miles downstream.

Aid workers are using the ring method: The vaccine is given to groups of people in contact with each Ebola case, such as family caregivers, as well as the contacts of those contacts.

About 7,500 doses are available to vaccinate 50 rings of 150 people each, according to Dr. Peter Salama, the deputy director-general for emergency response at the World Health Organization. An additional 8,000 doses will follow.

Let's hope that it's enough.

Every year, hundreds of thousands of horseshoe crabs, a threatened species, are "milked" for up to 30% of their blood that's used to test new medical drugs, including possible COVID-19 vaccines, for bacterial contamination. The animals are eventually released but, surprise, a large percentage of them die. Revive & Restore, the wildlife conservation organization most […]

The US government announced funding clinical trials on three COVID-19 vaccine candidates. According to Anthony Fauci, director of the National Institute of Allergy and Infectious Diseases, we're still on track for a vaccine at scale by the end of this year or early 2021. From CNN: Phase 3 trials, which typically involve tens of thousands […]