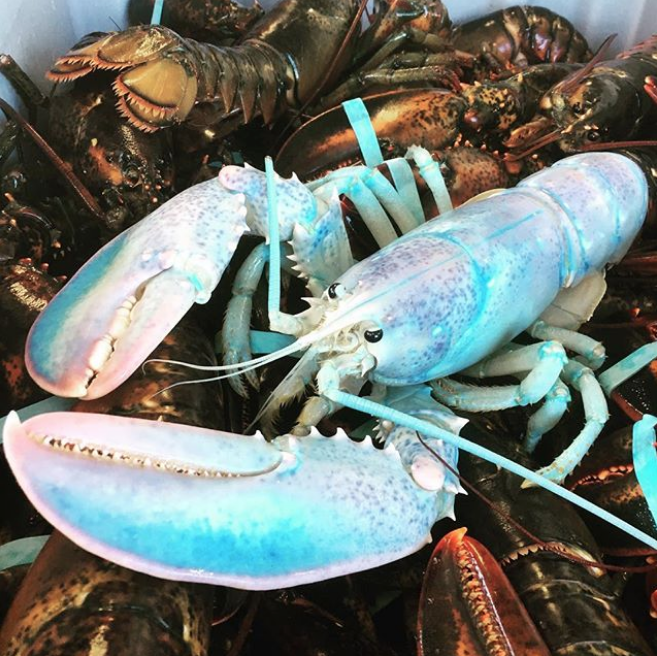 A 2 lb. cotton candy-colored lobster was discovered last November by a Canadian fisherman and it's just making the rounds on social media now.

Canadian fisherman Robinson Russell, 38, caught the lobster off Grand Manan Island in December and decided to donate the 2-pound crustacean to an aquarium in Saint Andrews, New Brunswick.

“Lucky” the lobster will be on display at the Huntsman Marine Science Centre’s aquarium for the remainder of the summer and fall seasons, Russell said.

“I really didn’t know what to do with it at first, so I decided to give it to the aquarium,” Russell said in a telephone interview Tuesday night.

His 5-year-old daughter, who was thrilled to see such a unusual lobster, will now be able to visit Lucky whenever Russell takes her to Saint Andrews. The aquarium opened May 19 and will remain open until Oct. 14.

Russell said he posted a photograph of the lobster on Instagram [last year], soon after he caught Lucky, but it wasn’t until this month that the picture created a stir on Instagram. Russell said a Maine lobsterman spotted the unusual colored lobster and reposted it on Instagram.

The CBC on its rarity:

According to the Lobster Institute at the University of Maine, the chances of finding an albino lobster are one in 100 million. But Robert C. Bayer, executive director of the institute, said this is just an estimate.

"There is no firm statistic on that," he said. "It is strictly a guess."

Bayer said it is easier to win the lottery than find a white lobster.