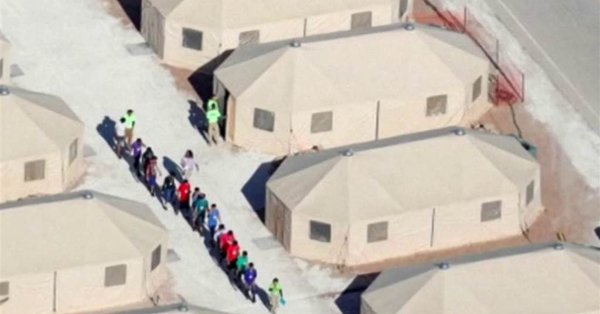 “Toddlers are being detained.”

The Associated Press just confirmed this.

The Trump administration has open three "tender age" shelters in south Texas where babies and toddlers forcibly separated from their parents by border guards are being stored.

They're basically jails for immigrant babies who are now, for today, functionally orphans.

Our government made these kids orphans.

There is no plan to reunite the families. In this report, one woman says the government can't tell her where her son is.

We don't have photos or video from inside the facilities. The government won't allow journalists in.

The Trump administration is separating families at the border. They're calling these prisons for kids "tender age shelters." We don't know exactly where they are.

“In general we do not identify the locations of permanent unaccompanied alien children program facilities,” said Department of Health and Human Services spokesman Kenneth Wolfe.

The three centers — in Combes, Raymondville and Brownsville — have been rapidly repurposed to serve needs of children including some under 5. A fourth, planned for Houston, would house up to 240 children in a warehouse previously used for people displaced by Hurricane Harvey, Mayor Sylvester Turner said.

Turner said he met with officials from Austin-based Southwest Key Programs, the contractor that operates some of the child shelters, to ask them to reconsider their plans. A spokeswoman for Southwest Key didn’t immediately reply to an email seeking comment.

The government now reportedly plans to open a fourth in Texas, according to AP.

Lawyers and medical providers who have visited the Rio Grande Valley shelters described play rooms of crying preschool-age children in crisis. The government also plans to open a fourth shelter to house hundreds of young migrant children in Houston, where city leaders denounced the move Tuesday.

Since the White House announced its zero tolerance policy in early May, more than 2,300 children have been taken from their parents at the U.S.-Mexico border, resulting in a new influx of young children requiring government care. The government has faced withering critiques over images of some of the children in cages inside U.S. Border Patrol processing stations.

Decades after the nation’s child welfare system ended the use of orphanages over concerns about the lasting trauma to children, the administration is standing up new institutions to hold Central American toddlers that the government separated from their parents.

“The thought that they are going to be putting such little kids in an institutional setting? I mean it is hard for me to even wrap my mind around it,” said Kay Bellor, vice president for programs at Lutheran Immigration and Refugee Service, which provides foster care and other child welfare services to migrant children. “Toddlers are being detained.”

Bellor said shelters follow strict procedures surrounding who can gain access to the children in order to protect their safety, but that means information about their welfare can be limited.

By law, child migrants traveling alone must be sent to facilities run by the U.S. Department of Health and Human Services within three days of being detained. The agency then is responsible for placing the children in shelters or foster homes until they are united with a relative or sponsor in the community as they await immigration court hearings.

But U.S. Attorney General Jeff Sessions’ announcement last month that the government would criminally prosecute everyone who crosses the U.S.-Mexico border illegally has led to the breakup of migrant families and sent a new group of hundreds of young children into the government’s care.

Former CIA Director John Brennan tells @AriMelber that a new Trump administration policy that is causing migrant children to be separated from their parents is a “tremendous” national security issue. https://t.co/Ev43o0SkjB

Corey Lewandowski, who said "womp womp" on national TV today regarding a 10-year old immigrant girl with Down Syndrome being taken from her mother, works for a PAC that gets donations from a company that owns private immigration detention facilities. https://t.co/CQJRCGfSXy pic.twitter.com/rztMztYisI