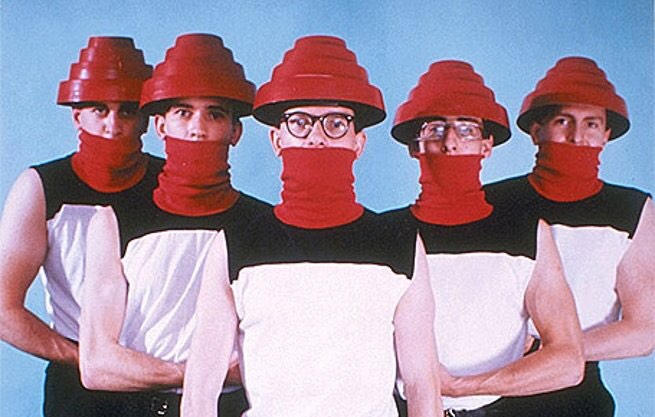 They're not dog bowls or flower pots, though DEVO's iconic red plastic vacuum-formed helmets, their "Energy Domes," have been mistaken for such things.

On the fan-site DEVO-OBSESSO, DEVO's co-founder and bass player Gerald ("Jerry") Casale explains their original intent (outside links mine):

It was designed according to ancient ziggurat mound proportions used in votive worship. Like the mounds it collects energy and recirculates it. In this case the Dome collects the Orgone energy that escapes from the crown of the human head and pushes it back into the Medulla Oblongata for increased mental energy. It's very important that you use the foam insert (which is included with every Dome when purchased from ClubDevo.com), or better yet, get a plastic hardhat liner, adjust it to your head size and affix it with duct tape or Super Glue to the inside of the Dome. This allows the Dome to "float" just above the cranium and thus do its job. Unfortunately, sans foam insert or hardhat liner, the recirculation of energy WILL NOT occur.

We did the red energy dome, which was useful besides being an icon it was a useful icon. You probably know this very well, but your orgone energy goes out the top of your head...and it dissipates out the top, but if you wear an energy dome it recycles that energy. It comes back down and showers back down on you and, among other things, you remain manly, shall we say, for maybe another 150 years of your life, probably. I think that's a safe prediction to say that energy domes if you wore them constantly, night and day which I don't do, but there are people out there who do, not too many of them but there are some. We get e-mails from them, so we know they're out there, those people will probably live about an extra 150 years because of all that orgone energy that they're saving and not wasting away.

We designed them, Jerry and I. We were influenced both by German Bauhaus movement and geometric fashion, and Aztec temples. We just liked the look. It looked good, and it didn't look like any other bands out there. We weren't interested in wearing groovy hats or groovy clothing. We kind of looked like Lego toys or something by the time we got those on our heads, and that was a positive thing.

From 1981, here's a terrific live TV interview with Jerry and Mark where they talk about their Energy Dome, and other topics, with Jack Cafferty:

"We fed dogs out of those things and they enjoyed it."

Also from 1981, here they are explaining what the Energy Dome can and cannot do:

"It is NOT suitable for putting in the oven."

"Again...we were having fun. It's just a ridiculous marketing idea. You take an object that's strong design, really strong design, and then name it something that makes it seem like it's something more than it is. So this is the 'Energy Dome' and we did that so every interviewer would go 'Hey look, it's a flower pot...'"

And there ya have it.

If you want to recycle YOUR own personal Orgone energy and possibly live an additional 150 years, get your own Energy Dome for $32.