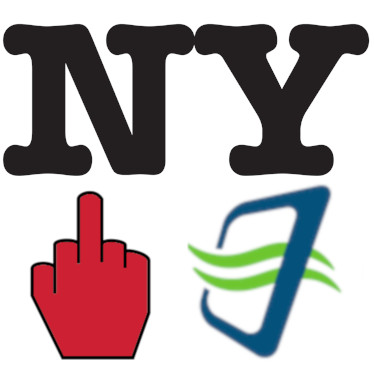 When Charter merged with Time Warner Cable, it promised the state of New York that it would expand its broadband network. It didn't actually do that, though it continued to report great progress on the project, which was a lot cheaper than actually making progress.

Now, NY Public Service Commission (PSC) Chairman John Rhodes says that the foot-dragging and lying could cost Charter its license to operate in New York, with the possibility that it would have to spin out Time Warner cable as a separate company. Rhodes accused Charter of "gaslighting" New Yorkers with its fake claims of investment and build-out and announced "a suite of enforcement actions against [Charter] Spectrum are in development, including additional penalties, injunctive relief, and additional sanctions or revocation of Spectrum's ability to operate in New York State."

As Comradephate commented on Ars Technica, it's easy to dismiss the PSC threats as bluster, because, after all, "Charter lied about having met the requirements, and then continued to do so after being explicitly told to stop by the state? What are they waiting for?"

But on the other hand: it's an election year. Everyone hates their ISPs. Net Neutrality is a wedge issue with massive support and we all know that Big Cable bought Ajit Pai, and we'd welcome a public beating for every cable operator in the country.

Hell, a guy can dream.

Charter agreed to a fine and a revised buildout schedule last year after missing a deadline to pass 36,250 homes and businesses within one year of the merger approval. The company says it has met subsequent deadlines, but the PSC says it hasn't.

Specifically, a PSC audit found that 14,000 homes and businesses claimed by Charter as new construction were ineligible. For example, Charter's "new" broadband deployments in New York City included addresses that the company was already required to serve as part of the franchise agreements, the commission said in March.

We asked Charter for a response to Rhodes' statements today and will update this story if we get one. Charter defended itself in a statement to the Times Union of Albany this week, saying that "Spectrum has built out our broadband network to more than 61,000 unserved or underserved homes since the merger."