'He did nothing wrong,' WH Press Sec. Sarah Sanders says on Trump, 'There are no charges against him.' 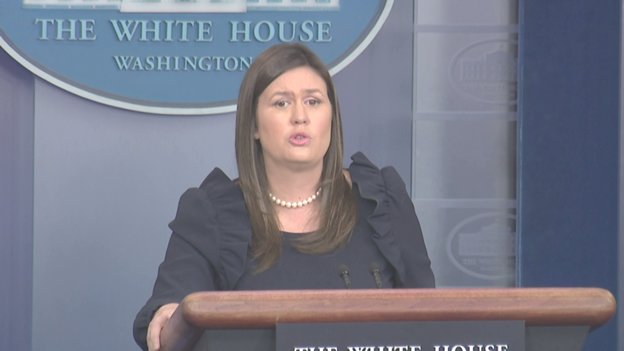 "He did nothing wrong," White House Press Secretary Sarah Sanders said Wednesday about the secret payments Donald Trump made to two women during the 2016 Election via his attorney, who just became a convicted felon.

The president did nothing wrong and is not concerned about the Michael Cohen or Paul Manafort guilty verdicts, Sarah Sanders said repeatedly to reporters at the White House Press briefing.

The briefing took place exactly one day after Paul Manafort and Michael Cohen were each convicted in two different federal cases of 8 felonies each.

"He did nothing wrong. There are no charges against him."

Her tone was far more subdued, her language far more cautious, than in previous bellicose briefings in which she berated a room full of TV anchors and press scribes.

The Trump train's going down.

Asked about the possibility of issuing a pardon to Paul Manafort, Sanders said the matter had “nothing to do with the President in any way.”

The line from the WH, now repeated four separate times from her about 10 minutes in: "He did nothing wrong. There are no charges against him."

The White House Press Corps are challenging her and doing the job we need them to do. Watch this briefing.

“As the President has stated on numerous occasions he did nothing wrong. There are no charges against him in this,” press secretary Sarah Sanders says about Michael Cohen's plea deal pic.twitter.com/LgcTmj38r3

Today Sarah Sanders suggests that because Trump hasn’t been charged with a crime, he didn’t commit one.

Under DOJ guidance, Trump can’t be charged with a crime while in office. Now that his lawyer has implicated him in a crime, the public must examine the evidence against him.

Narrator: It's not. He lied about this. He lies all the time.https://t.co/yPYIhG4dWi

Asked on whether Trump will pardon Manafort, @PressSec said she has no knowledge if it being under consideration.

Asked whether Trump lied, given that he denied knowing anything about the payments to women while the criminal information says he coordinated with Cohen to pay hush money to them, Sanders calls the question “ridiculous.”

Sarah Sanders continuing the “nothing to see here” line. Trump hasn’t been chargedso let’s move on. This is madness.

"That's not something that has been up for discussion," Sarah Sanders says, when asked if Trump will pardon Paul Manafort.

He literally admitted that he lied today. https://t.co/oU2rHpx7sd

.@PressSec keeps responding to questions about Michael Cohen by saying "no charges have been filed against" Trump.

Sanders asked if Trump is worried about what Cohen might say: "I don't think the president's concerned at all. He knows he did nothing wrong and that there was no collusion."

we should all start incorporating Sanders-like answers into our personal lives.

Feds: "Your student loans are past due"
Me: "Listen, I'm not going to get into a back and forth..."

.@PressSec's Wednesday talking points:
- The president has done nothing wrong.
- He faces no charges.
- There is no collusion.

REPORTER: The president says he only knew about payments "later on" but he's on tape discussing them BEFORE the payments. How do you explain that?

SANDERS: I've commented about this pretty extensively. The president did nothing wrong. There are no charges against him.

Asked if the fact that Trump's hiring of felons violated his pledge to hire "the best people," Sanders says, "The president has employed thousands of people in his lifetime and had incredible successes...He's the president of the United States, I think he's doing quite well."

Asked repeatedly about public statements the president of the United States has made, his taxpayer-funded spokeswoman refers instead to his outside counsel

Asked if they can come to the White House to answer reporter Qs, she says they don't work there

"The idea of an impeachment is frankly a sad attempt by Democrats. It's the only message they have going into the midterms," Sarah Sanders says.

Asked what the president meant when he told Reuters he could "run" the Mueller investigation if he wanted to, Sanders says words that do not address the question.

I didn't get called on this WH briefing. My question: Can you guarantee the American people that President Trump has not committed any crimes for which he could be indicted? Either before the campaign, during the campaign, or after the campaign?

Trump denies telling Cohen to pay off women, despite being on tape https://t.co/0jxj7FCtrs

Asked when Trump "learned" of the payments to McDougal and Daniels, and whether there are any other payments to women, Sanders refuses to answer, refers the media to Trump's outside lawyer.

SANDERS: "As the president said, we've stated many times, he did nothing wrong, there are no charges against him, and we've commented on this extensively."

Q: "Then why not report these payments?"

SANDERS: "Again, I'm not going to get into the back and forth details." (via ABC) pic.twitter.com/7PMOYZFFSx

Sarah Sanders says the Manafort case has nothing to do with the President and the White House.

Except evidence was presented that Jared Kushner received job suggestions from Manafort.

White House refuses to answer NBC News questions about when they last talked to Manafort.

NBC News: Several political pundits seem to suggest that the Cohen plea is his word against the President's.

Here's Andrea Griswold, federal prosecutor, detailing the evidence they had and would have used to prove the counts involving the President at trial: pic.twitter.com/MFLuFxQO6k

It's worth noting that if she admits Trump lied — which he did, he's on camera saying he knew nothing of it and later saying he did — it means she also lied. Or, at minimum, that her boss straight up lied to her and did so for months. https://t.co/Sj08ChGihW