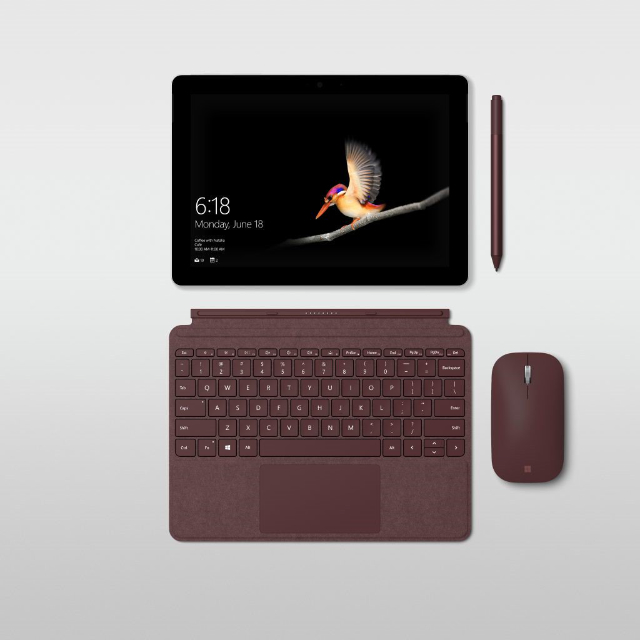 Every year, I wait for Apple to announce mouse support for the iPad. Every year, I am left unfulfilled. Apple's nailed the apps that I need to do my job on the go, but the lack of a mouse for interacting with text slows my workflow way the hell down. Tapping on my tablet's display and dragging words around is a poor substitute. As such, I'm constantly searching for a tablet that can give me what I need.

Android's not an option as I can't use Scrivener with it. Without it, my working world would implode. A few years back, I invested in a Microsoft Surface 3. Its weight was such that I could carry it around in my backpack without tweaking the scarred muscle tissue in my neck. It was small enough that using it as a tablet to read a comic book or peruse the news didn't feel awkward. But I found, even with 8GB of RAM, that it was woefully underpowered, and while it could be used with a mouse, the trackpad built into its keyboard cover was terrible. In the end, I ended up selling it and returning to my iPad.

Three years later, Microsoft released the Surface Go: while it looks like a Surface 3 doppelgänger, it's a far more capable computer.

I bought mine a couple of weeks ago and so far, the complaints I've got about it are pretty minor.

First, for a computer, this thing is wicked light--almost two pounds less than my 2015 MacBook Pro. It's an ideal carry for working on an airplane, typing in a coffee shop or simply having with you in case you feel the need to pull out a computer and do some work. I've caught myself checking to see if it was still in my bag, more than a few times. That's a win, as far as I'm concerned.

I opted for the 8GB RAM/128GB SSD model. 4GB of RAM is too damn pokey. I then increased its storage capacity by popping a 400GB SanDisk Ultra micro SD card in it. There's more than enough room to stash all of the documents, Dropbox and SpiderOak Hive files and photos and right now, sixty HD movies to watch when I've got nothing better to do. As a tablet's it's merely OK--the iPad's got the Surface Go beat when it comes to a touch-friendly interface and apps. But I get by: with Windows 10 tablet mode, reading a webpage, chatting on Twitter or Slack and goofing on comic books feels good. The Surface Go's display, to my eye, is just as good as what you'll get from an Apple mobile device. Movies look great. Text is crisp. That's all I need.

As a productivity machine--for typing, editing and a bit of photographic tinker work--the Surface Go is almost exactly what I'm after. There's enough room on its wee display to view a pair of documents, side-by-side, without going blind in the attempt. Being able to use Microsoft Word, Ai Writer, the desktop version of Firefox and the other apps I rely on to do my job has increased my productivity while I'm working away from home. It's not perfect, however: if you want to do anything more than the most basic of edits in Lightroom or Photoshop, you're going to have a bad day. Additionally, and this is more of a "me" problem than it is a problem with the Surface Go, Scrivener 3 for Windows, a release that'll bring the features of the Win10 version of the app into line with what Mac and iOS users currently enjoy, won't be out until the end of the year. I can live with this... provided it's only for a few months. I'm told by Scrivener's dev team that they're in beta testing with the update now. That news helped me to make the decision of whether or not to keep my Surface Go.

I dig the Surface Go's keyboard. Yes, you have to pay for the keyboard cover separately. But that's the case when you own an iPad, too. The keys have better travel and feel better to work with than Apple's current crop of MacBook keyboards, but aren't nearly as nice as the ones baked into my beloved Logitech EasySwitch K811. Some folks might find typing with the Surface Go to be a bit cramped. But my fingers are trained from years of using and testing 9.7" iPad and iPad Pro keyboards, so it didn't take long to get up to speed. The keyboard cover's trackpad is light years better than the one that Surface 3 users had to contend with. It makes quick, smooth work of editing text and switching between apps (damn it Apple, get your pro-user shit together).

There's other touches that I appreciate as well: the tablet's kickstand makes it easy to set up for viewing at a multitude of angles. I love that I can travel without the Surface Go's wall wart and charge it via it's USB C port, instead. That it comes with USB C at all is a win. It means that I can charge my headphones, smartphone (if I'm rolling with out my iPhone 7 Plus, which I frequently do) and computer all with the same cord, cutting down on the clutter in my rucksack. It feels solid: not beefy, but surprisingly sound for its size and weight. I like Microsoft's industrial design. Their gear looks good. I haven't attempted to throw any games on it yet, as that's not what I bought it for. When I get around to it, I'll let you know how things pan out.

Overall, I'm pretty happy with this thing. Provided I don't break it doing something stupid, I'll be using it for years to come.