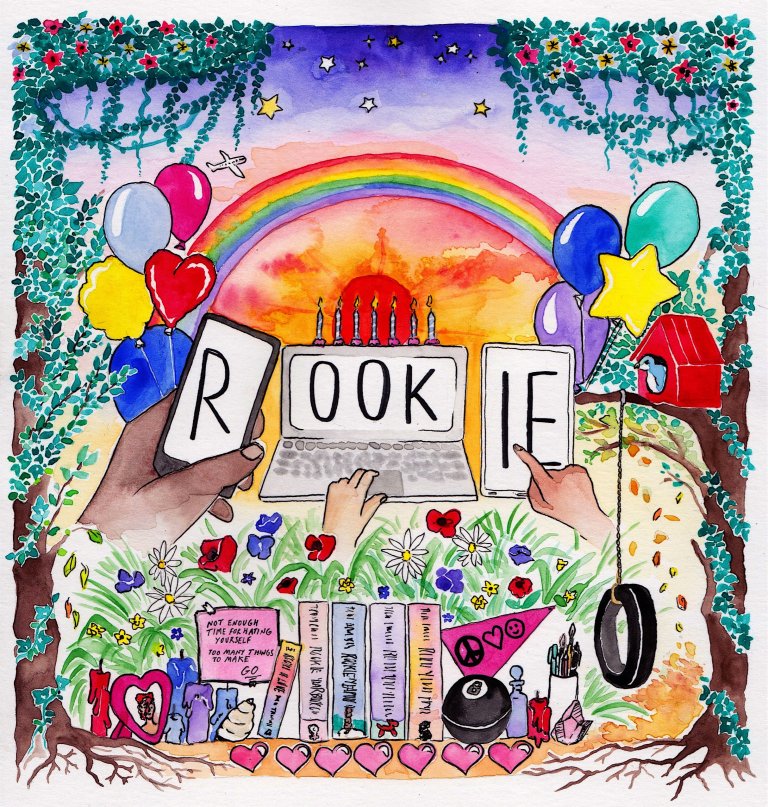 At the age of 15, Tavi Gevinson was the prodigy founder of Rookie, a latter-day second-coming of Sassy Magazine -- a smart, funny, critical teen magazine that presaged the odd world we live in now, when magazines like Teen Vogue have become highly politicized.

Rookie is must-read material, and its annual collections were some of the best books in print, year after year.

Seven years later, Gevinson has a burgeoning acting career (she's very good), and a heavy heart about her online creation. Rookie has been a victim of the mediapocalypse, in which the majority of advertising money has been creamed off by the social media platforms, who control access to audiences and bat small, cash-strapped media business around like cat toys, demanding that they "pivot to video" or some other bullshit.

As her business became more fraught, Gevinson resigned herself to raising investment capital, only to discover that the process presaged a future where she would hate her life and her publication: relentless pressure to grow; endless meddling from investors with conflicting, uninformed advice; high stakes and with them, pressure to compromise on matters of principle.

What's more, Gevinson's been doing Rookie since she was 15 and now she's 22. Realizing your girlhood dream is cool: being trapped in it once you're a woman is a little chafing.

The upshot of all of this is that Gevinson is folding up her publication.

I'm heartbroken, though I completely sympathize. Though I didn't start work on Boing Boing as a teenage, I have been working on this project for nearly 18 years now, which is a fuck of a long time. And like Gevinson, I started pursuing my dream of an art career as a teenager, and, incredibly, attained it -- and hardly a week goes by that I don't shake my head in wonder (and sometimes frustration) at the idea that I'm a grown-ass adult who is a science fiction writer: that's like growing up to own a candy factory, or climb trees for a living, or working as a cowboy.

And like Rookie, Boing Boing has had its financial ups and downs, battered by the same market forces that clobbered Gevinson. We've also been courted by investors who convinced us that taking money would on their terms would make us all miserable.

We're hanging in -- thriving, even -- and I find it hard to imagine life without Boing Boing. Especially in the Trump era, I attain some measure of calm by treating news as something that I imbibe under controlled conditions, with the goal of reflecting critically on it (rather than merely being into reactions after I'm nonconsensually eyeball-fucked by Trump's chaos-headline barrage).

I have enormous sympathy and gratitude for Gevinson and I wish her all the best. My one objection to her otherwise excellent analysis of the rise and graceful departure of Rookie is her plan to take the whole site offline. That represents a huge loss. I want my daughter to be able to read that site. I hope she'll reconsider and partner with someone like the Internet Archive to keep it around indefinitely as a record of a remarkable, groundbreaking, inspiring project that changed the world for the better.

Who would I be if this was not such a big part of my identity? What would it force me to confront—about youth, the passing of time, myself—if it were to end? What loss would I feel if it were to just go away? What kind of guilt, if it had been my choice? These are important questions to me, and I think that leaving them as hypotheticals would be a mistake. Another important question: What would it do to my brain to know what it’s like to not be responsible for a business, and/or synonymous with a brand? That’s another thing I would tell myself when I was really anxious and stressed: You’re just sad that you have to live on your own now and support yourself; that making work which people are meant to consume means having/being a brand; that you’re growing up and that capitalism exists. But those responsibilities are different for a writer and actor than they are for a business owner, or for a figurehead of a business that has to make enough money to pay its workers fairly. I would also tell myself that once Rookie was in its next, better-functioning state and I could step back, those anxieties would cease, or they would be only symbolic. But I also knew in my heart that even if Rookie was not my literal daily job, even if my name was no longer on it, it would still feel like mine, and thus be my responsibility in some way.

I know Impostor Syndrome and now Scammer Syndrome, and I know when I don’t feel them at all: when I am reading, writing, acting, or helping a friend with their own writing. When I do these things, I am not thinking about my own worthiness, because I am working in service of the character, story, or idea at hand. For a long time, working on Rookie was just that, and I was comfortable with the amount of hustle required of me to then promote it. (More than comfortable with it, I enjoyed it; I’m a performer, after all.) Now, like I said, the industry requires more hustling. It would not be possible for me to make Rookie work, and do other work I care about. I am also less comfortable being a figurehead of anything, let alone people younger than me, than I was before. Also, art projects typically have end dates, while a business is pretty much supposed to go on for as long as possible. That scared me, too. Anyways, I don’t need to get into the merits of one career over another. There’s no better or worse; there’s just what’s right for you. If I’m in a position where I can follow my instincts around that, it would be silly and untrue to myself—and actually, not very Rookie—to ignore them.

I have spent the fall learning what it would mean to sell Rookie to a new owner who could fund it, build it, hire more people. I have learned that I can’t take on the responsibility that would come with remaining as its editor, or even transitioning it to a point where I could leave completely. Also, to sound like a broken record because they are cool and good for DJ’ing, most media companies are also struggling. They can’t afford to buy other publications that are struggling, and/or they are understandably not interested in spending the money to get Rookie to sustainable profitability without the founder/editor/owner since day one—in other words, me. I can’t make that commitment, and at this moment, Rookie can’t exist without it.