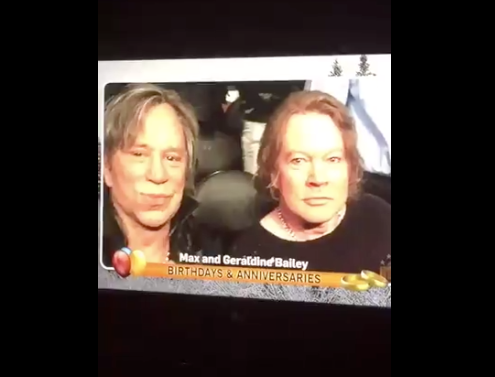 An unidentified local news station celebrated the 50th wedding anniversary of couple "Max and Geraldine Bailey" during a "Birthdays & Anniversaries" segment, except that they showed a picture of actor Mickey Rourke and Guns N' Roses' Axl Rose instead.

That photo of Rourke and Rose was taken at a boxing match in Los Angeles earlier this month and garnered reactions like these:

No, these are not two retired school teachers waiting for their grandkids dance recital to begin while their husbands find parking.

This is Mickey Rourke and Axl Rose at a boxing match in LA over the weekend. pic.twitter.com/1cooQ4Fed9

Mickey Rourke and Axl Rose look like your Aunt and Uncle from Texas just showed up for Christmas dinner. pic.twitter.com/ShtwKiHSAU

From People: PEOPLE has an exclusive first look at the cover of Sweet Child O'Mine, an upcoming picture book the band created in collaboration with James Patterson that takes the lyrics of Guns N' Roses' song of the same name and spins it into a story perfect for the littlest fans. "As a longtime fan of Guns N' […]