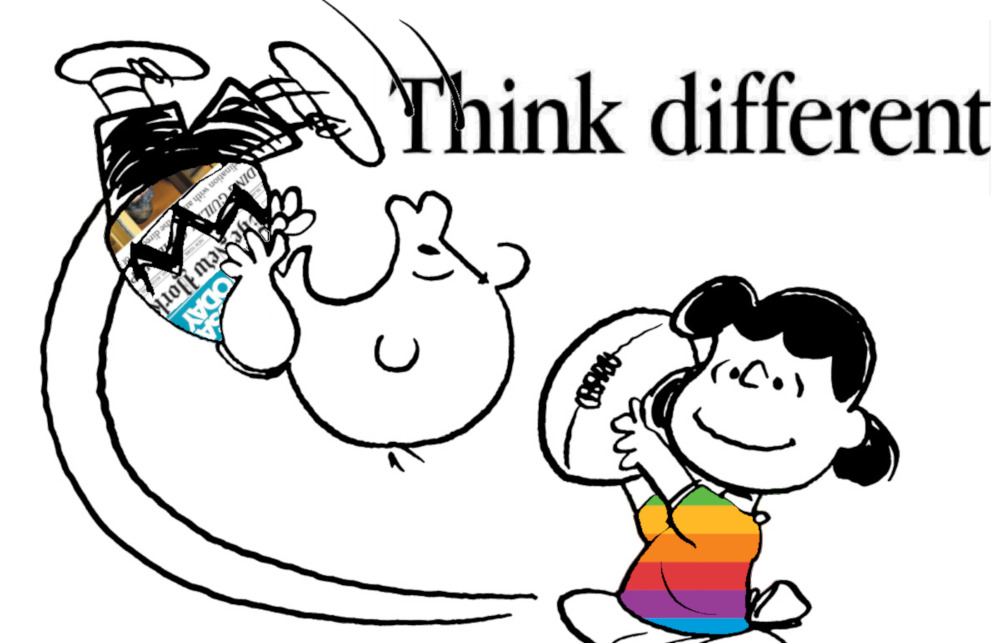 Apple's been playing Lucy-and-the-football with the media industry for years now, exploiting the media's horrible Daddy Complex that has it forever searching for a tech company that will give it a sustainable future.

The latest such bid is Apple's forthcoming "Netflix for news" product that will collect $10/month from subscribers and then share the revenue among media outlets, based on the pageviews each outlet generates.

Leaks from people involved in negotiating the deals have it that Apple is planning on keeping 50% of the revenues generated by its product (double the rate it keeps from Itunes "sales," and much more than it charges software vendors who use Ios App Store, who pay 15%-30% depending on the transaction).

This is a reminder that whether or not you are paying for the product, you are the product. Google sells you to advertisers (for laughably small sums, because it sucks at predicting which ads will trigger sales and thus has to collect ever-larger quantities of personal information to make ever-smaller gains in its prediction accuracy); and Apple sells you to copyright holders: the music industry, the movie industry, software vendors, and news outlets (Apple doesn't always sell you: sometimes it just milks you, as when it spends millions to kill Right to Repair laws in order to force you to pay a premium to get your property serviced, and to give it control over when a machine has to be landfilled and replaced, rather than fixed and re-used).

In both cases, you have a giant, secretive, tax-dodging, essentially lawless would-be monopolist using a combination of market-cornering, DRM, restrictive license terms, trade secrets, confidentiality agreements, financial engineering, and other tactics that were illegal until Reagan killed antitrust to maximize profits.

Both have public stances on censorship and surveillance that are purely expedient and grounded in whatever makes them the most money: Apple fights the FBI, and proclaims its aversion to surveillance while collaborating with the Chinese government to help it spy on 1.6 billion people, and helping the US government suppress news about civilians killed in black-ops drone-strikes.

But the bottom line is, there are no good monopolists. There are no good massive, multibillion-dollar multinationals. Companies are not your friends. In late-stage capitalism, a corporation is a potentially immortal artificial life form that uses humans alternately for nourishment and as gut flora.

Adding to the pressure is that Apple’s paid news service is coming at a critical time for the company, one that has seen iPhone sales slump and a new emphasis on services as a key revenue source for the company. Apple News comes preinstalled on every one of the billions of iOS devices in the world, and converting even a fraction of those users into ongoing paid subscribers would be a huge addition to Apple’s services business.

It’s a strategy the company has already used to achieve great success with Apple Music, which leveraged its first-party positioning to offer actual competition to Spotify. Pulling a similar coup with News and its 90 million users would be key to the company’s future — but it needs to have compelling content, from partners who feel the deal is worth it, in order to accomplish that. Asking already beleaguered news publishers to fight over just half the total revenue on a per-view basis seems like a bad way to star