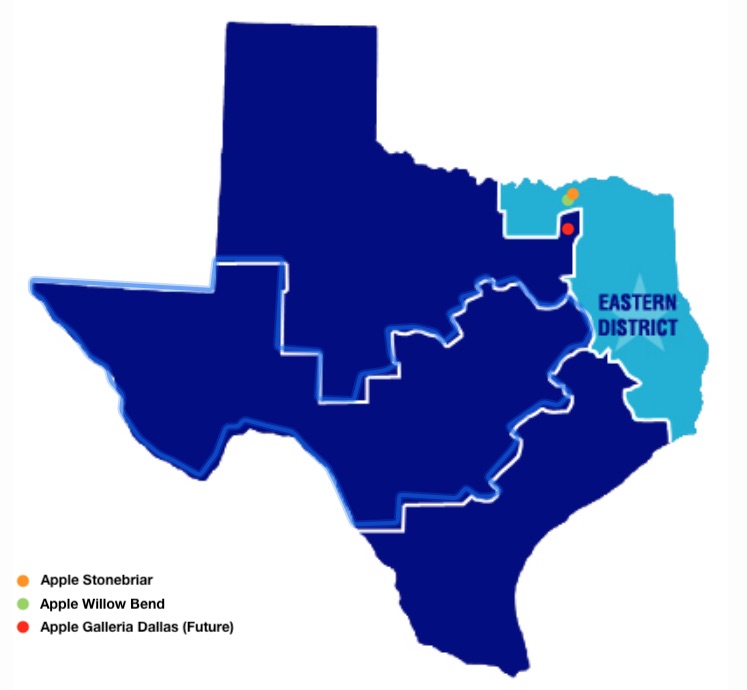 The Eastern District of Texas is home to a crooked court that is in the pocket of patent trolls, handing down ludicrous rulings in favor of the trolls, whose "head offices" are tiny, unoccupied offices in empty, dusty office buildings, the rent on which entitles patent trolls to claim that their rights are being infringed in the demense of the Eastern District's terrible judges.

A report in Macrumors cites "five sources familiar with the matter" and claims that Apple is now planning to shutter all the Apple Stores within the Eastern District, replacing them with a giant store in the Galleria Dallas, just over the line from the Eastern District, reported to be opening on April 13. The closures were officially confirmed by Apple in a statement to Techcrunch.

Such a move would help Apple avoid the Eastern District's jurisdiction, escaping the residency requirement that cases be heard "where the defendant has committed acts of infringement and has a regular and established place of business."

Apple Willow Bend in Plano, Texas and Apple Stonebriar in Frisco, Texas, both located in the northern suburbs of Dallas, are expected to permanently close in mid April. One source said each store's final day of business will be Friday, April 12. Employees were briefed about the plans earlier this week.