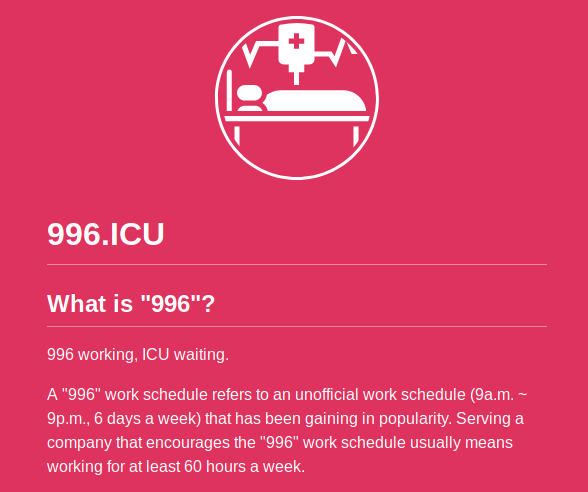 Katt Gu and Suji Yan's Anti 996 License allows developers to prohibit the use of their code by companies that do not adhere to basic labor practices (996 is a Chinese software industry term for shops where coders work 9AM-9PM, 6 days/week).

Under the license terms, the software can only be used by companies that adhere to the most restrictive of International Labour Organization standards and the labor laws in every country where the company has offices (ILO guidelines safeguard the right to unionize, among other important labor rules).

The license was inspired by China's burgeoning anti-996 movement, though there are many US firms that fall short of the terms set out by the Anti 996 License.

75 projects on Github have adopted the license since it was created last weekend, and a crowdsourced blacklist enumerates the companies whose practices mean that they cannot use anti-996-licensed code, including Alibaba, and Bytedance, the parent company for the popular kids' social media app Tiktok.

The anti-996 license may violate the Open Source Initiative's canonical Open Source Definition, which excludes licenses that limit re-use "in a specific field of endeavor."

It's a fascinating addition to the chaotic tumult roiling the open source licensing world.

Evan You, the Chinese-American developer behind the open source programming framework Vue, says he's "empathetic to developers that have to deal with 996" but that Vue won't adopt the Anti-996 License.

"I believe open source software should be free for all, and adding discriminatory clauses is against the very spirit of free software," You says. "It's also a slippery slope: If it's considered good practice to add Anti-996 clauses today, then it's only a matter of time for open source software to add clauses that block out anyone who doesn't hold the same ideological stance as its author."

Meeker says the Anti-996 License is more professional than most other activist licenses she's seen, but it might be hard to enforce. "The consequence of violating a license condition is only a loss of rights to use the software," she says.