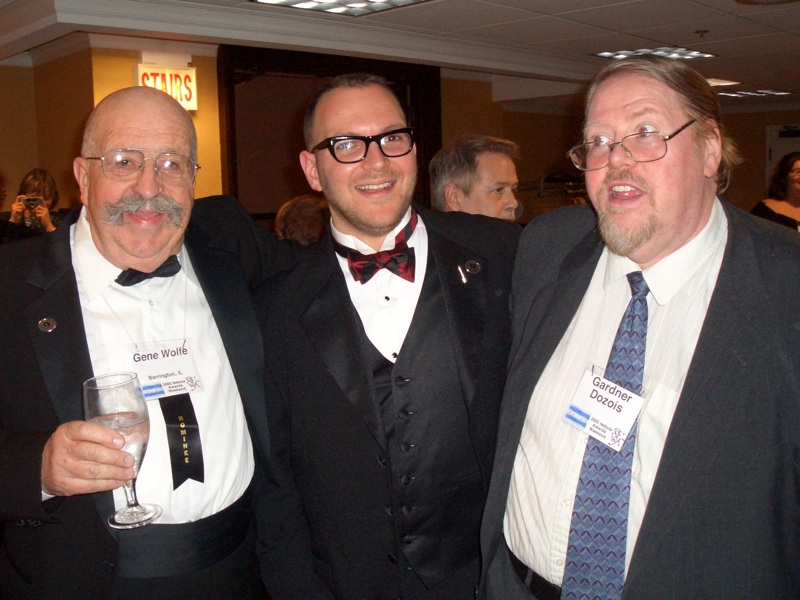 Gene Wolfe, author of more than 30 books including classics like The Book of The New Sun, has died at the age of 87.

Wolfe was kind enough to give me a blurb for my third novel, Someone Comes to Town, Someone Leaves Town, and to make references to it in his later work, something that thrills me even to this day when I think of it. I met him on a few occasions and shared a meal or two with him and found him to be the proverbial jolly old elf, full of wit and charm and mischief, the kind of person who looked and acted exactly as you'd expect he would, based on his marvellous body of work (this is a rarity as most of us writers are mundane introverts who put all of our wildness on the page).

I'm so sad to hear that he's gone. Although he lived a long and wonderful and varied life (he invented the Pringles machine!) and left behind a staggering and brilliant literary corpus, the world was a better place with him in it. I'll miss him.

Wolfe’s fans include Michael Swanwick, Neil Gaiman, Patrick O’Leary, Ursula K. Le Guin, and many, many more, and he was praised for his exciting prose and depth of character. Asked by editor Damon Knight to name his biggest influences, he replied: “G. K. Chesterton and Marks’ [Standard] Handbook for [Mechanical] Engineers.” In 2015 The New Yorker published this profile of Wolfe by Peter Bebergal, in which the two discussed his decades-long career—it’s well worth a read.

Wolfe won the Edward E. Smith Memorial Award in 1989, the World Fantasy Award for Life Achievement in 1996, and was inducted into the Science Fiction Hall of Fame in 2007. In 2012, The Science Fiction and Fantasy Writers of America named him its 29th SFWA Grand Master.