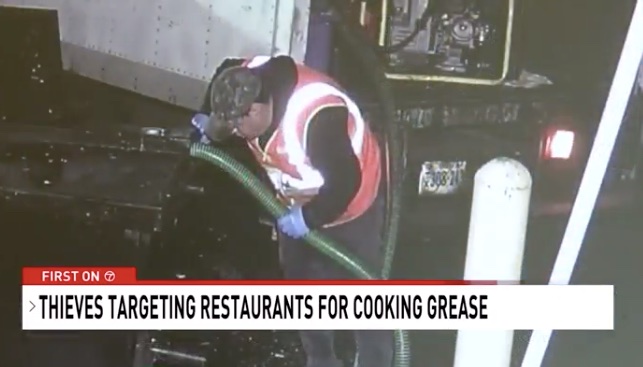 The Associated Press social media editor who composed this little beauty below deserves some kind of a prize today.

A whopper of a haul: Police say a Virginia man stole hundreds of gallons of used cooking grease from a Burger King. But he couldn't give police the slip. https://t.co/lAK49gjwVQ #odd

So does the headline writer.

From “Grease is the way we are stealing in northern Virginia” —

Alvaro Mendez Flores of Richmond admitted to the April 4 theft. Court documents state Mendez Flores backed up his box truck to the grease dumpster at the Annandale Shopping Center and used a hose to begin siphoning the used oil into a 1,600-gallon tank.

So, apparently the used cooking grease this guy stole can be resold to make... biodiesel fuel.

The suspect, one Mr. Alvaro Mendez Flores, told police he would get paid 25 cents a gallon for the stolen oil.

From the local news report at WJLA:

Surveillance video showed the 3:30 am crime—the driver backing up a white box truck, hooking up a green hose, and firing up a generator, which helped pump grease into a 1,600 gallon container in the back of the truck.

The footage also showed the police, who said they caught Mendez Flores in the act.

Court documents show the Richmond resident told detectives that his boss would give him 25 cents a gallon—around $300 to $400 a trip.

Mendez Flores said he got away with up to 900 gallons of grease in March, and claims his boss has other drivers who also steal grease in Virginia and Maryland.

Investigators said stolen cooking grease is often sold to bio-fuel facilities to be recycled for around $2 a gallon—making it a lucrative black market.