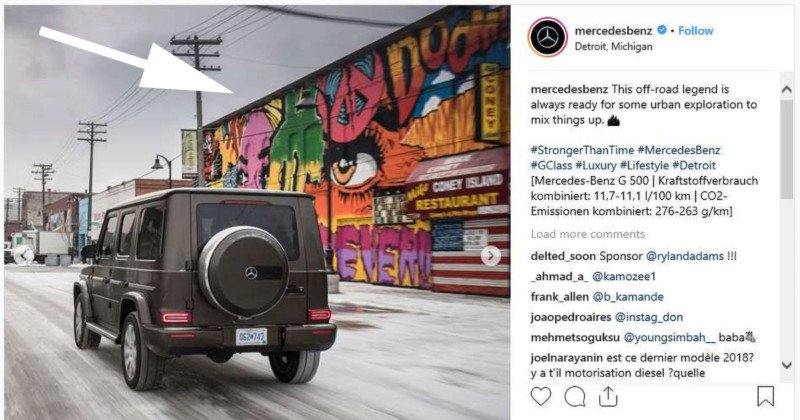 Mercedes has asked a court to verify that a commercial photo of one of its cars driving down a street in Detroit does not violate the copyright of the artists who painted a public mural visible in the background.

The case comes after the mural artists -- Daniel Bombardier, James “Dabls” Lewis, Jeff Soto, and Maxx Gramajo -- made public statements accusing Mercedes of violating their copyrights a year after the photo's initial publication. Mercedes is seeking to affirm that photos that capture incidental images of public artworks are fair use (but Mercedes is not asking the court to rule on more traditional copyright infringement theories, such as whether commercial reproductions of a public artwork that feature the artwork are fair use).

They say "hard cases make bad laws" and this is one of those cases. My natural inclination is to side with the Davids (the mural artists), not the Goliath (Mercedes), but if Mercedes is found to be infringing, that sets a precedent that can be wielded against everyone, not just giant corporations (who will always be able to afford lawyers to argue their case).

I used to live on a street that backed onto a graffiti alley in San Francisco: should I be allowed to create an author photo of me standing on my fire-escape with the murals in the background without tracking down the street artists who made them? How about a news photographer who captures an image of a cop beating up a protester in a park that features a copyrighted sculpture?

It was only a year after the photos were published that the artists began accusing Mercedes of copyright infringement. All that harm must have really been delayed, I suppose. As a symbol of their artistic dedication, even after Mercedes took the photos down from Instagram due to the complaints, those same artists continued to demand Mercedes pay them for the images. In its suit, the car company is arguing both that its use was fair use and that the murals are exempt from copyright as a matter of law.

Mercedes argues that its inclusion of the murals was fair use and that the murals are exempt from copyright protection under the Architectural Works Copyright Protection Act since they’re permanent parts of the architecture.

Which seems like a bit of a stretch. Permanent is not the word I would use for graffiti, having seen it, you know, removed before. The fair use argument is much stronger, given the limited nature of the use, the fact that it wasn't the subject of the larger use, and the damned fact that all of this is in full view of the public. Mercedes was using Detroit to sell its cars, not these murals. Calling this copyright infringement would make no more sense than a restaurant across the street from the murals being accused of replicating a public performance by putting in patio seating in full view of the mural.