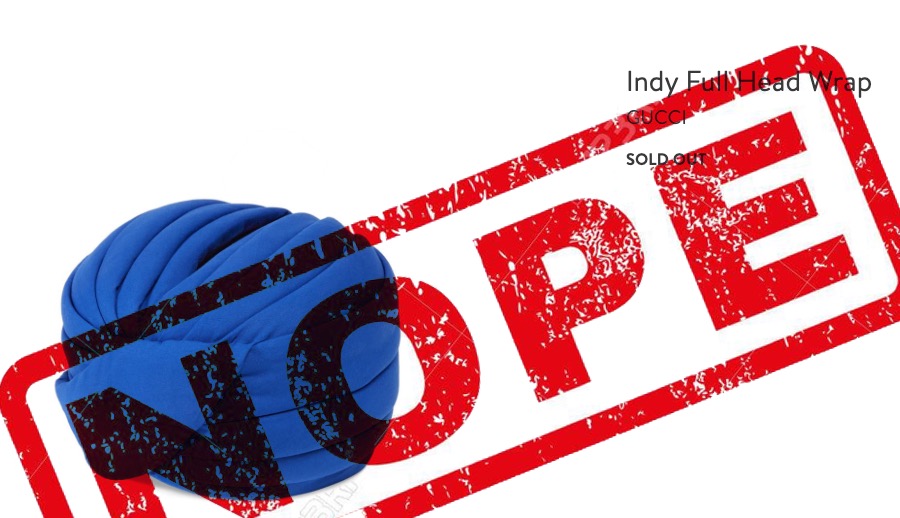 “As a Sikh, I see this as a huge sign of disrespect and disregard toward Sikhism,” an observer tweeted about images of a thin white guy model strutting down the catwalk with the Gucci “Indy Turban” on.

The turban is styled to look like to the headwear that followers of the Sikh faith wear.

“The Sikh Turban is not a hot new accessory for white models but an article of faith for practising Sikhs,” Harjinder Singh Kukreja tweeted.
‏
“Your models have used Turbans as ‘hats’ whereas practising Sikhs tie them neatly fold-by-fold,” @SinghLions continued. “Using fake Sikhs/Turbans is worse than selling fake Gucci products.”

The elite Italian designers were dragged on social media in 2018 for not at least sticking that bright blue turban on a South Asian model.

But Gucci don't care, and so in May 2019, this week, they started selling this crap online at Nordstrom.

But the initial backlash apparently had little effect, as keen-eyed social media users discovered this week that Gucci’s “Indy Full Turban” — described as a “gorgeously crafted turban” that is “ready to turn heads while keeping you in comfort as well as trademark style” — was being sold by Nordstrom for a reported price of nearly $800. The revelation has since prompted Sikhs and other critics to come after Gucci again, accusing the brand of trivializing an article of faith whose wearers often face discrimination and are attacked for expressing their religious identity.

By late Wednesday, the turban’s listing on Nordstrom’s website was marked as sold out and its $790 price tag was no longer visible. The department store and Gucci did not respond to requests for comment.

Nordstrom and Gucci did not respond to requests for comment.

Yep. They're that dumb.

Yo.. @gucci ... I mess with you guys... but this isn't a good look for you... could you not find a brown model? pic.twitter.com/INqxwrfB0t

My blood is boiling right now. As a Sikh, I see this as a huge sign of disrespect and disregard towards Sikhism. It isn’t hard to educate yourself on the significance of a turban. This isn’t a mere fashion accessory! Thank you Avan for speaking out on this

This is beyond aggravating. Did someone at @gucci even bother to figure out what a dastaar (turban) means to Sikhs? Did it cross your minds to consider the history behind our identity? My people are discriminated against, even killed, for wearing a turban. pic.twitter.com/G62edSmjhf

Dear @gucci, the Sikh Turban is not a hot new accessory for white models but an article of faith for practising Sikhs. Your models have used Turbans as ‘hats’ whereas practising Sikhs tie them neatly fold-by-fold. Using fake Sikhs/Turbans is worse than selling fake Gucci products pic.twitter.com/sOaKgNmgwR