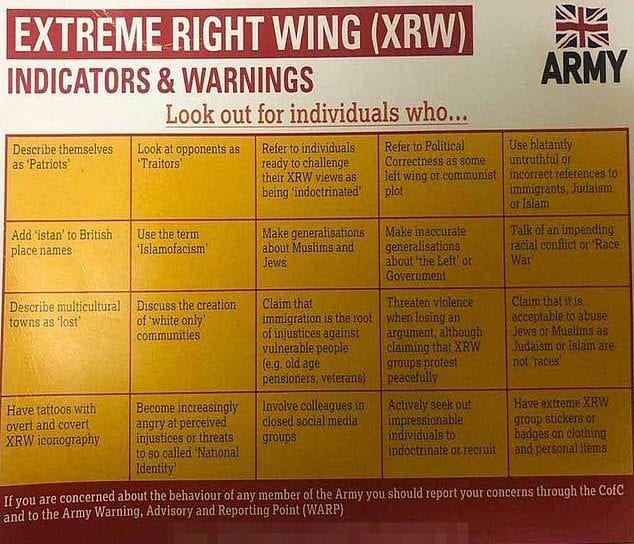 The UK Ministry of Defense has confirmed the authenticity of a leaked copy of its 2017 leaflet, "Extreme Right Wing (XRW) Indicators & Warnings," provided to senior defense staff to help them identify and root out far-right extremists in the ranks.

The leaflet identifies 20 traits that are said to be indicative of far-right extremist ideology, from "describing themselves as 'Patriots'" to "looking at opponents as 'traitors'" to "becoming increasingly angry at perceived injustices or threats to so-called 'National Identity'" to "having extreme XRW group stickers or badges on clothing and personal items."

It was produced after four soldiers in the West Midlands were arrested under the Terrorism Act, accused of being neo-Nazis and plotting acts of terrorist violence. Since its publication, other serving members of the British military have been tried and convicted for plotting far-right terror and recruiting others to join far-right terror groups.

After the leak, a spokesperson for the Ministry of Defense clarified that people who satisfy a few of the traits on the list may not be of concern, but the more boxes they tick, the more likely it is that they are implicated in far-right extremism.

Now, the leaked Army document, which was originally designed to “educate Chains of Command on the indicators and warnings of personnel who may harbour extremist views”, cues anyone worried about the behaviour of soldiers to report their concerns to the Army Warning, Advisory and Reporting Point.