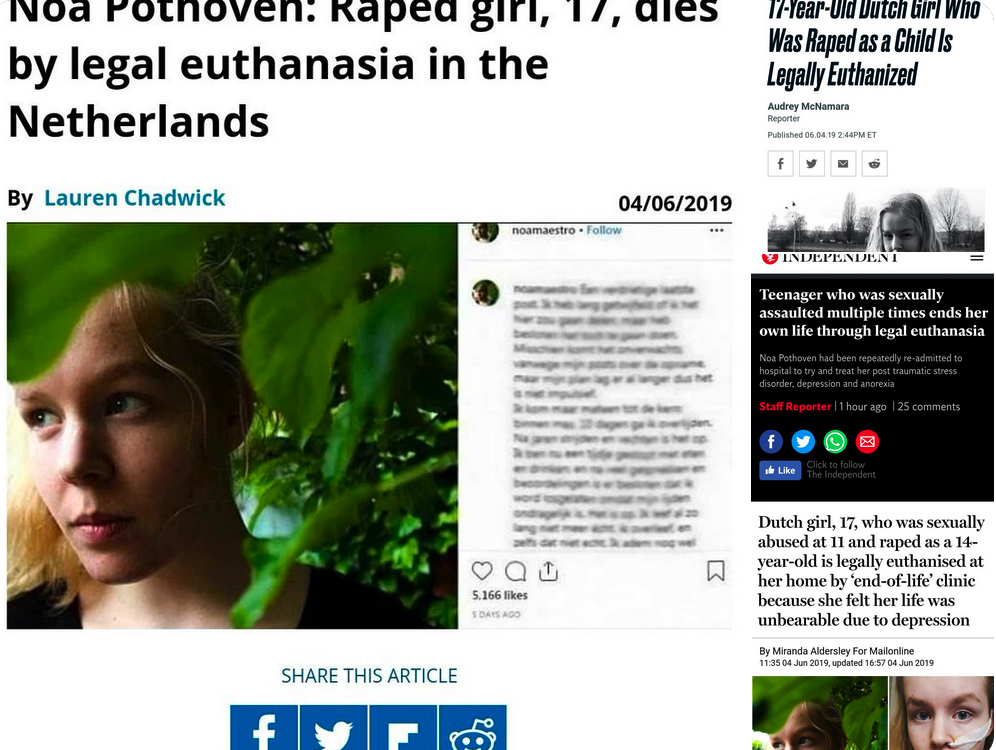 Due to a mistranslation of the Dutch source material, the publish-now-edit-later nature of modern newsmedia, and perhaps a smidgen of hand-rubbing over the practice of euthanasia, everyone is falsely reporting today that a Dutch teenager was put to death with the consent of the state.

A 17-year-old rape victim was NOT euthanised in the Netherlands. @euronews @Independent @DailyMailUK @dailybeast are all wrong It took me about 10 mins to check with the reporter who wrote the original Dutch story. Noa Pothoven asked for euthanasia and was refused. Infuriatingly, it's too late: this misinformation has already spread all over the world from Australia to the United States to India. Her name, #noapothoven is even trending in Italy. I spoke to Paul Bolwerk, a reporter who has been covering the story for @DeGelderlander since 2018. Noa Pothoven had been severely ill with anorexia and other conditions for some time. Without telling her parents, she sought and was refused euthanasia ... A decision to move to palliative care and not to force feed at the request of the patient is not euthanasia. Dutch media did not report Noa Pothoven's death as a case of euthanasia. This idea only appeared in English language pickups of Dutch reporting.

The "edit fuckscramble" is afoot right now at various outlets. This is when manifestly false stories are panic-edited one word or sentence at a time and republished, each version doomed to further revision until something defensible finally results—at least if you forget what the story was supposed to be about in the first place.

I have surely done this myself. All our glasshouses are shattered now, so let's be frank.