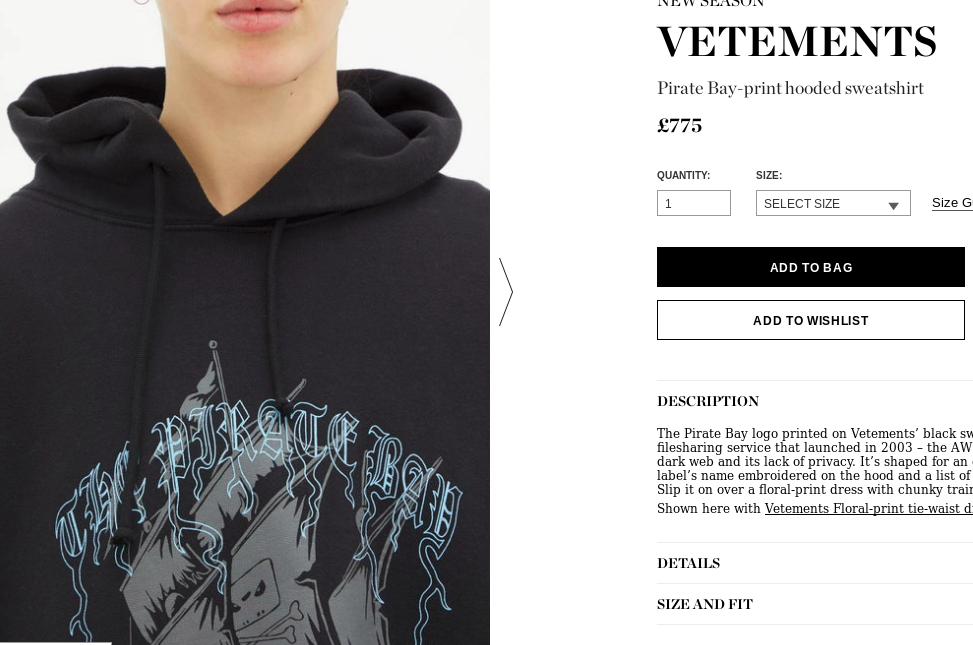 Vetements claims its clothes -- like this £291 unauthorized DHL tee -- cost so much because they use special factories and really good materials.

It's hard to understand how its unauthorized €800 Pirate Bay hoodie pencils out, though -- which is why Pirate Bay co-founder Marcin de Kaminski denounced the product, citing its price, rather than any notional infringement, as the source of his ire.

There's plenty weird going on with this garment, like the list of the nations of the world on the back that omits Sweden -- birthplace of The Pirate Bay.

While the full ship emblem on the front isn’t an exact replica of the original, it’s so close as to make very little difference. Those squinting to read the text along the bottom are advised it reads “Vetements Free Downloads”, in case anyone doesn’t recognize this is a Pirate Bay-themed hoodie, of course.

The back of this stunning piece of high-fashion cloth is adorned with an alphabetically-sorted list of countries of the world. While that’s perhaps expected given The Pirate Bay’s reach, Sweden – the site’s birthplace – is completely absent.

The big question here is whether someone in the setting department screwed up and left Sweden out, or is this one of those clever fashion things that’s designed to provoke conversation. The Pirate Bay can be found everywhere except Sweden? That works – on a couple of levels.