This cast iron griddle is cheap and fantastic 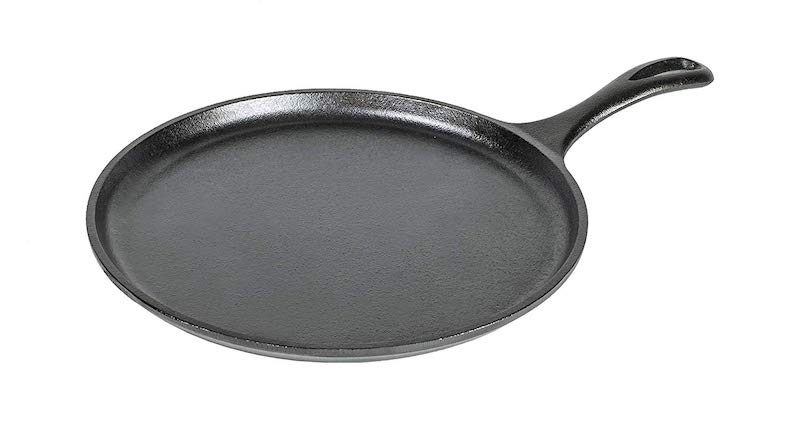 I've been using this 10.5" cast iron griddle at my brother's place, and it is just great.

I keep a #9 cast iron skillet on my stove at almost all times. My brother prefers a cast iron griddle. I can see the attraction.

The griddle is great all the things I do with a skillet, and also serves as a pizza stone. The lack of sidewalls can make grease management a bit more of a chore, however when making pancakes or otherwise looking to get under and flip frying items things become a lot easier. I didn't notice how much angling around and dickery goes into using my skillet.

Eggs over easy are a lot easier to wrangle.

I have a #8 'Chicken Pan' that is essentially a very deep walled skillet (with a self-basting lid) that I use for fried chicken. I could use that for deep frying, and a griddle for everything else... however I'm awfully fond of my skillet.

I have a griddle I picked up at a cast iron flea market ages ago, and never bothered to refinish. My brother has this Lodge item and it is wonderful. It will serve for generations.

I gave my mother my treasured 5-quart Lodge deep skillet and lid when I found a lovely antique to restore. I’ve been using it while visiting with them. It was no easy thing when I gave my Mom my Lodge chicken pan. I had been using it for ages as my primary skillet and perfected […]

I have offered plenty of advice on caring for your cast iron cookware. Stop seasoning it in the house, use your BBQ. Seasoning this stuff in the oven (my favorite old way,) or on the stove smokes your house up. Just throw the shit on the grill. Super thinly put a coat of oil on […]

I want to go there. My favorite pan is a Wagner I got at Goodwill in San Francisco. I especially like to refinish cast iron waffle irons. (Thanks, David Wolfberg!)