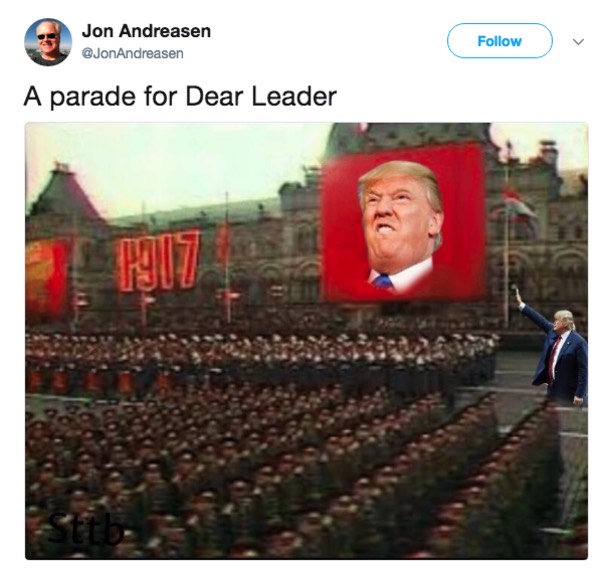 It's not supposed to be a political campaign ad. But it will be.

Donald Trump is planning to to have U.S. military planes, including a jetliner that is among the aircraft used as the President's Air Force One, fly over the National Mall in Washington, DC as part of his Fourth of July celebration in a few weeks, the Washington Post reports.

OMG this thing is going to be so very extra awful.

He's also planning to deliver a televised speech while standing on the Lincoln Monument.

The whole thing sounds like a venal and grotesque setup for the Trump 2020 political ad campaign.

The Interior Department says it had “nothing to announce” about a military flyover on the Mall. Trump hasn't tweeted about it yet. Lawmakers are upset, and demanding details about the taxpayer-footed-bill for all of this North Korean style dear leader fanfare.

The flyover reflects Trump’s long-standing interest in replicating the Bastille Day celebration he observed in France in 2017 and his desire to throw an extravagant patriotic celebration, according to the people, who spoke on the condition of anonymity because final plans have not yet been announced. He has regularly been briefed on the event.

Under the arrangements, Trump would not be on board the presidential Boeing jetliner as it flew overhead, the people familiar with the plans said.

The White House, which declined to comment Tuesday, has provided few details on how it plans to change the long-standing celebration of Independence Day in the nation’s capital. The Washington Post reported in May that the president plans to speak on July 4 at the Lincoln Memorial in an event dubbed “Salute to America,” a move that has shifted the National Park Service’s fireworks launch from the reflecting pool area to West Potomac Park.

On Tuesday, three senior Democrats on the Senate Appropriations Committee wrote Interior Secretary David Bernhardt a letter asking that he provide the panel with details on how much the celebration would cost, who would pay for it and what other changes were planned.

“We are deeply troubled that the president’s involvement at the event will turn the long-standing, nonpartisan celebration into a de facto campaign rally conducted at taxpayer expense that will serve to further divide rather than unify the nation,” wrote Sens. Tom Udall (N.M.), Patrick J. Leahy (Vt.) and Chris Van Hollen (Md.). “We are also concerned that the decision to expand the event to include a potential Presidential address will require the National Park Service to divert resources from other priorities of the Mall or other national park system units at a time when it is facing significant budgetary pressures to address its $12 billion deferred maintenance backlog and accommodate record-setting visitation.”

Separately, Van Hollen and D.C. Del. Eleanor Holmes Norton (D) wrote House and Senate appropriators Tuesday that they need additional funds this year for the District’s Emergency Planning and Security Fund because it will run out of funds in July, in part because it has still not been reimbursed $7.3 million for costs stemming from Trump’s 2017 inauguration.

1852: "This, for the purpose of this celebration, is the Fourth of July. It is the birthday of your National Independence, and of your political freedom. This, to you, is what the Passover was to the emancipated people of God. It carries your minds back to the day, and to the act of your great […]

Buzzkill alert: The thousands of illegal fireworks over L.A. cause air pollution

It brings me no joy to write this, as I love me some fireworks (including the amateur ones) on the Fourth of July. However, it seems the thousands of (mostly illegal) fireworks set off over Los Angeles each Independence Day are causing bad air pollution. The Los Angeles Times reports: Americans’ fervor for Fourth of […]

Watch this timelapse of illegal 4th of July fireworks over L.A.

View this post on Instagram Happy Fourth of July Timelapse Tuesday! The best fireworks are in the hood. They are technically illegal, but that doesn't stop much of the city from getting down. This is a blend of a short video and an hour long timelapse made up of 800 photos on a Rokinon 50mm […]