Possible detection of Sarin reported at Facebook facility in Menlo Park, 'no employees exposed,' may be false positive 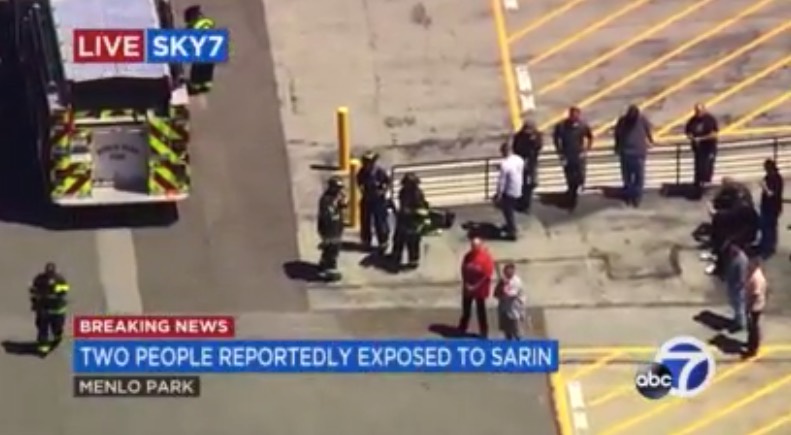 No employees have been exposed to the substance, officials said.

Multiple San Francisco Bay Area news outlets are reporting that firefighters are on the scene of what is described as a possible exposure to “sarin gas” or another chemically similar nerve agent at a Facebook mailing facility in Menlo Park, California. It may have been a false positive machine detection.

The substance has not been confirmed to be sarin.

No employees show signs of exposure to or poisoning by the substance, the Menlo Park District said.

The specificity of initial reports seems suspect -- it's hard to know what is accurate at this early stage.

Sarin gas is a man-made chemical that attacks the central nervous system.

It is a clear, colorless liquid, and is classified as a nerve agent. Exposure to sarin gas can lead to convulsions, paralysis, and can cause death.

Lots of things can give a false positive for G-series nerve agents (which includes “Sarin”), depending on the detection technology used. Let’s not go all apeshit, folks. https://t.co/XRhFqTaQCf

BREAKING: The deadly poison sarin was detected in a mail bag at Facebook's offices in California https://t.co/JSD7Crjj8C

Per Menlo Fire:
- Facebook runs all their mail through a machine that can detect dangerous substances.
- Today, that machine alerted employees that a package might contain sarin; nobody was actually exposed.
- @facebook protocol is to alert the fire dept to remove/test substance

Menlo Park Fire officials say machine at Facebook's mailing facility alerted employees that a package might contain sarin; the employees themselves were not exposed to the substance.

No confirmation on what the substance actually is: https://t.co/X03hfLANmm

I’m going to venture out on a limb and guess that a corporate facility isn’t using the high end of chemical warfare detection on routine mailbags.

At the cheapest end of detection is colorimetric detector paper. It gives a Sarin-like response to many materials. pic.twitter.com/bpSywnsTQJ